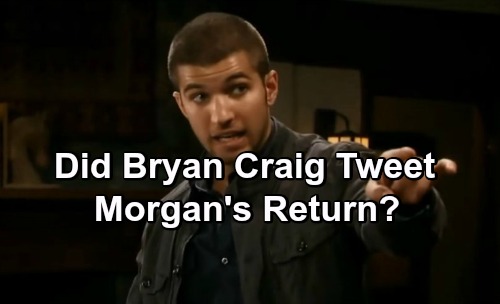 General Hospital (GH) spoilers are coming out that Morgan Corinthos might be back and it’s not a recast but the return of Bryan Craig in the role. The actor sent out some tweets that seem like he’s announcing his return to GH, could it be?

On Wednesday, Bryan tweeted “People need to calm haha. I’ll come through again and pick up right where I left off.” That sure sounds like he’s talking about GH. Right where he left off was missing and presumed dead, if you don’t count the fake zombie Morgan scenes.

Fans went wild asking for confirmation of whether he would return to General Hospital and Bryan tweeted on Thursday, “Don’t get ahead of yourselves” with a winkie face. No recast of the role has been announced but Bryan Craig did have some time left on his contract.

Could this be an elaborate ratings ploy staged by Frank Valentini and Bryan Craig? Bryan said he was leaving the show to pursue other interests and he did make one low-budget indie film, but he’s got nothing else showing on his IMDB page.

Was this an orchestrated break from the role to give Bryan time off to make the film? Did they plan all along to resurrect Morgan and keep Bryan Craig in the role? Have GH showrunners and Bryan Craig taken fans for a ride by faking a departure from the show?

It seemed strange for Bryan to up and leave GH, particularly since he had just scored an Emmy for the part of Morgan Corinthos and was getting really juicy scripts with his bipolar storyline. Whether you like the role of Morgan or not, Bryan was kicking butt up until the point Morgan blew up.

If Bryan is returning, that would be great for many GH fans who adored him in the role. In terms of storyline, it would ease some of Sonny Corinthos’ (Maurice Benard) guilt since he still blames his mob lifestyle for Morgan’s death even if he didn’t directly contribute to his murder.

There is lots of story to play out this week with Curtis Ashford (Donnell Turner) and Jason Morgan (Billy Miller) uncovering the perp that set the bomb. And we all know if there’s no body found on a soap, that means the character can pop back up at any time.

Remember, there was someone peeking in the window of Sonny’s house the night he told Carly Corinthos (Laura Wright) their son died and many have suspected this was Morgan. That would fit in with Bryan Craig returning to the role after a planned break. 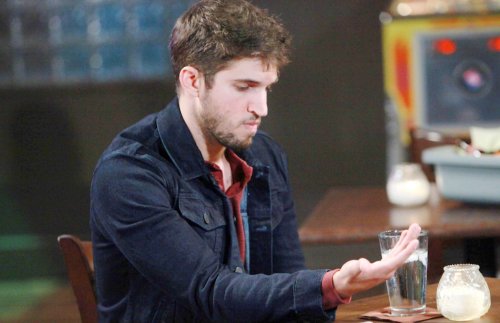 There’s no official word yet from the ABC soap on Morgan’s return or a recast, so GH could go either way with this. But with Bryan Craig offering hope to fans via Twitter, we might see Morgan back sooner than we expected.

Share your comments below and vote in the poll on Morgan’s return and come back to CDL often for the hottest General Hospital spoilers, news and updates.

People need to calm haha .Ill come through again and pick up right where I left off…….