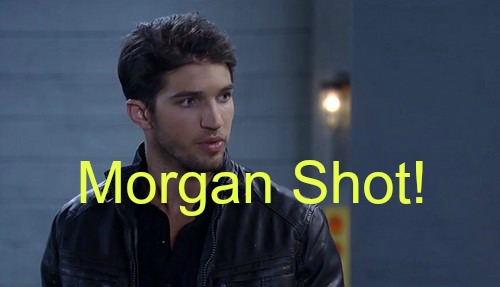 “General Hospital” (GH) spoilers reveal that Carly Corinthos (Laura Wright) will soon have second thoughts about her most recent marriage to Sonny Corinthos (Maurice Benard) after an upcoming mob conflagration puts her youngest son at risk. Will they split up?

Sonny is getting back his ability to stand and walk, but has lied to Carly about his progress. As usual, Sonny has put revenge above all else. He is so single-mindedly focused on taking Ava Jerome (Maura West) down that he’s willing to trick his family into thinking he’s still weak.

Sonny is plotting a big “a-ha” moment where he stands up from that chair and takes Ava down personally so he can show her that he’s not any less of a man. Ava pushed all those buttons at their custody trial – that’s when he blew up and lost Avery because of these threats.

Sonny hasn’t forgotten that and is plotting to take Ava down for her involvement with Raj the gun runner. Max Giambetti (Derk Cheetwood) just broke the news to Sonny that Ava isn’t stockpiling guns but seems to be using Port Charles as a weapons sales point.

Sonny is over-confident about his ability to take Ava down because he thinks it’s just her – he has no clue that Paul Hornsby (Richard Burgi) is pulling her strings – and that someone else is pulling Paul’s. In fact, Sonny is out of his depth and will make a big miscalculation soon.

His scheme has focused 100% on Ava and she’s only about 20% of the problem. Sonny’s hubris will put himself in danger – and his loved ones – and could cost him his latest marriage to Carly. Sonny’s big plan to take down Ava goes awry because of his assumptions.

GH spoilers reveal that this lack of understanding on Sonny’s part results in a mob shootout breaking out in Port Charles – likely down on the docks during a gun shipment. Sonny will find himself outgunned because he’s facing much more than Ava.

But Morgan Corinthos (Bryan Craig) could also end up in the line of fire. Not only has he been poking into the Raj business on his own, but the gunrunners know that Morgan has been sniffing around. Plus, because he’s working at the Corinthos coffee warehouse, Morgan is in proximity to the docks.

As unbalanced as Morgan is – plus GH spoilers indicate he’ll start skipping doses of his bipolar meds – he’ll run into the fray to try and help his dad. Remember Sonny had that dream that someone was calling for his help and he needed to be there for them?

Could that be about Morgan? Will another kid of Sonny’s end up taking a bullet because of Sonny’s mob ties and lack of judgment? Michael Quartermaine (Chad Duell) has been shot before and Sonny himself shot other son Dante Falconeri (Dominic Zamprogna).

Will his third son taking a bullet because of Sonny be too much for Carly to take? Will she realize that Sonny will never walk away from all of this and rethink whether she can be with him? Carly has to think about Josslyn Jacks (Eden McCoy) and the safety of the family.

Julian Jerome (William deVry) has shown that it is possible to get out of the life – but Sonny has chosen not to. That will be a hard pill for Carly to swallow and she may back off from Sonny for good. What do you think? If Morgan is shot, will that be the last straw for Carly?

Share your thoughts in the comments below and check back with CDL often for more “General Hospital” spoilers and news.