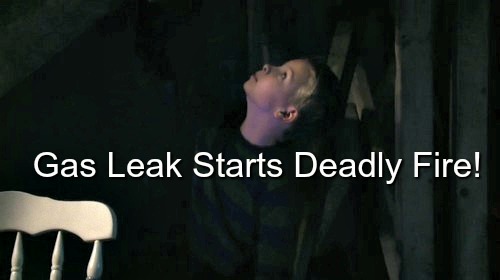 “General Hospital” (GH) spoilers reveal that Sam Morgan (Kelly Monaco) will survive her fall down the basement stairs, but Jake Spencer (James Nigbor) doesn’t know that since he’s just a scared little kid. Jake will check Sam over and thinks he’s killed her.

From there, he’s terrified at what will happen once his parents find out. Jake will either roll Sam out of the way and stash her – or will do something else to obscure her presence. GH spoilers hint that how Jake handles Sam after her fall ties back to what was done to him on Cassadine Island.

When Liz Webber (Rebecca Herbst) and Jason Morgan (Billy Miller) come back from GH to talk to Jake – after dire warnings from Franco (Roger Howarth) – they have no idea Sam is down in the basement injured. When Sam comes to, she can’t get anyone to hear her because of what Jake did.

He’s upstairs with his parents, scared to tell them about Sam, scared of what he’s done to her – while they try to talk to him about therapy and anger. Liz and Jason don’t know it’s too late. Jake seems to be recalling some of his past when he was with Helena Cassadine (Constance Towers).

Looks like when his dark thoughts became a reality, it snapped something in Jake and now he’s just scared and broken. Sam will realize she needs to get out and get medical help, but can’t just stand up and walk out because of the tumble.

Looks like Sam will inadvertently start a gas leak in the basement – perhaps she kicks a valve… The result is that she will start experiencing hallucinations about her past in Jason from inhaling the gas and that the gas leak will move beyond the basement and into the house.

Whether this will end up with a fire – or with Liz being at risk from gas inhalation – isn’t certain, but GH spoilers indicate more than one life besides Sam’s will be on the line this week. By week’s end, we’ll see Sam at the hospital fighting for her life. A fire is very likely and you will read why!

Jason is by her side and Liz sees this as history repeating itself and the reunion of JaSam is inevitable. Liz and Jason will have to figure out what to do with their son after this terrifying incident and whether regular and art therapy at GH is enough or more needs to be done.

While Sam will survive the ordeal, as will Liz, there will be fallout for everyone personally and there could be some collateral damage from the incident with Sam and Jake that complicates Jason and Liz’s co-parenting relationship soon.

GH spoilers indicate that in coming days, Liz and all her kids will take refuge at Wyndemere. This indicates strongly that the gas leak turned into a blaze. This also means Jason will have to come to Nikolas Cassadine’s (Tyler Christopher) turf to see his son.

Will Jake tell his parents that Sam is burning to death in the basement or will Sam make enough noise to be heard and rescued? Let’s take a firm guess that it’s Jason who rescues Sam.

Don’t miss a moment of the action as Sam fights for her life and be sure to check back with CDL often for more “General Hospital” spoilers and news.