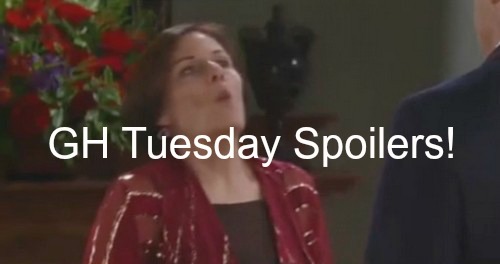 “General Hospital” (GH) spoilers tease big action on Tuesday February 16 that will rivet all fans to their seats as the fabric of Port Charles begins to unravel – expect major involvement from Morgan, Sonny, Anna, Dillon, Sam, Jason and more. Check out who needs more treatment, who’s making bad choices, and who is leveraging an interesting opportunity.

First, Dillon Quartermaine (Robert P Watkins) convinces Anna Devane (Finola Hughes) to be part of the next Crimson issue devoted to real women. As beautiful as she is, Anna isn’t interested in modeling, but she is very interested in Paul Hornsby (Richard Burgi).

How can Anna resist spending one-on-one time with Paul’s son to try and ferret out more information about the mystery sister and Paul’s other dirty laundry? Ava Jerome (Maura West) hears them talking but will she blab to Paul or keep this to herself?

Will Paul try and interrupt the photo shoot before Dillon can give away and useful info? Paul goes to see Tracy Quartermaine (Jane Elliot) who does not want to see or hear anything from him. Tracy tells him to skedaddle.

Does Paul notice that Tracy is “off” and she’s having weird ‘sit and stare’ spells that seem like fits or seizures? Is Tracy having early on-set Alzheimer’s Disease or some other neurological pathology? Who’s going to get that woman to the hospital? Speaking of GH, Liz Webber (Rebecca Herbst) and Jason Morgan (Billy Miller) are there together.

Both Liz and Jason got the call about Jake Spencer’s (James Nigbor) prognosis. Seems like Jake needs more work on his little bones – and maybe on his little mind. Monica Quartermaine (Lesley Charleson) breaks the upsetting news to them that Jake has more medical issues.

Will Griffin Munro (Matt Cohen) be part of this conversation? GH spoilers indicate that Liz and Griffin will have a disagreement about Jake’s care plan. Soon, though, Jason and Liz will agree to let Jake be treated at Shriner’s Hospital for Children.

Griffin also has to deal with Sonny Corinthos (Maurice Benard) who is being difficult and insists on hiding his improved condition. Griffin thinks Sonny should at least tell Carly Corinthos (Laura Wright) and knows that Sonny is trying to trick his enemies.

Can Sonny bring Griffin around to his point of view? Sonny has to deal with someone in his life and sees the relationship shift. Who is this about? Ava? Morgan Corinthos (Bryan Craig)? Carly? This will either be a really good or really bad development.

Morgan is off his meds and making bad decisions. He’s headed down into a manic episode and Kristina Corinthos (Lexi Ainsworth) tries to talk some sense to him. It won’t work. Look for Darby Collette (Jesica Ahlberg) to turn up soon and make trouble.

Kiki Jerome (Hayley Erin) is taking it personally that Morgan’s equipment wouldn’t cooperate when they tried to get intimate. Instead of realizing this is strictly about the meds, Kiki thinks it might be about her. Franco (Roger Howarth) serves as a shoulder to cry on while Morgan makes a misstep with Darby.

Alexis Davis (Nancy Lee Grahn) is ready to launch her wedding preparations and gathers her girls around her for some precious family time. Sam Morgan (Kelly Monaco) shares the good news that she and Jason are getting much closer.

Be sure to watch the Tuesday February 16 episode of GH and come back to CDL for more “General Hospital” spoilers and news.