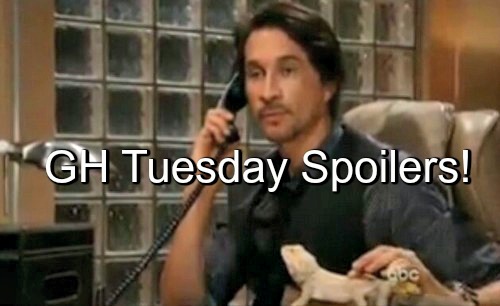 “General Hospital” (GH) spoilers reveal we get some quality time with Dr Finn on the Tuesday March 22 episode, Franco can’t resist tormenting Jason, Nina wants answers about her fertility, and Sam gets a lead from Spinelli on Hayden.

We caught a little glimpse of Dr Hamilton Finn (Michael Easton) stroking a lizard and looking like a super-villain on Monday’s show, but on Tuesday, we get the whole Finn. The handsome and familiar looking new doc shows up to GH at Monica Quartermaine’s (Leslie Charleson) request.

General Hospital spoilers ask will the writers add in little jokes about Finn looking familiar or are we doing to see everyone ignore that he’s a doppelganger of a doppelganger? Either way, GH fans are thrilled to have Easton back. Too bad his patient Tracy Quartermaine (Jane Elliot) is trying to make a break for it.

Tracy is busy packing her bags since all she heard was “no cancer” while Dillon Quartermaine (Robert P Watkins), Monica and Dr Griffin Munro (Matt Cohen) try to get her to see reason and that she’s not fit to walk out. GH spoilers say Dr Finn’s arrival should shut down all her protests.

What we want to know is if Larry Ashton (Hugo Napier) intentionally infected Tracy or if it was just an accident? It will be Liz Webber (Rebecca Herbst) that first gets to check out Dr Finn and directs him to Tracy’s room. Did we see a look of recognition in her widened eyes?

Also, Liz is still haunted by that creepy picture book that Helena Cassadine (Constance Towers) willed to her. GH spoilers promise that Liz is determined to find out what secret it is that Helena wants Jake Spencer (James Nigbor) to keep between just the two of them.

Liz will come up with an idea of how they can restore his memories. Is Franco (Roger Howarth) in on this? He seems very determined to stand by Jake in his hour of need even if Liz is playing cool and distant. (We are still shipping “Friz” hard – even if it’s just as BFFs).

Alexis Davis (Nancy Lee Grahn) pronounces Sam Morgan (Kelly Monaco) and Jason Morgan (Billy Miller) not man and wife and says the papers are all filed and they are not married anymore. Now they can restart their romance fresh. Both will be thrilled.

Jason will be less thrilled, though, when Franco stops by their table at Kelly’s to chat and makes it clear that he is Liz’s new confidant about Jake and Jason is out of the loop. Franco lets it “slip” that Liz has some info about Jake’s time on Cassadine Island that she told him, but not Jason.

Damien Spinelli (Bradford Anderson) reaches out to Sam with some info on Hayden Barnes (Rebecca Budig). He found the name Naomi associated with the Rachel name we’ve heard and Sam will decide to bring up the name Naomi and see what Hayden does.

Before that goes down, Hayden checks out the portrait of Helena drinking tea that Nikolas Cassadine (Tyler Christopher) was left and wonders at its significance. Look for Nik to change the subject ASAP. Did he poison his granny and that portrait captured his crime somehow?

Finally, Nina Clay (Michelle Stafford) is determined to get a baby and has an appointment with Dr Kelly Lee (Minae Noji) to get assessed. But first she runs into her evil aunty Dr Liesl Obrecht (Kathleen Gati) and tells her she’s there to get her fertility checked out.

Dr O does NOT look happy about that. It was Dr Britt Westbourne (Kelly Thiebaud) that told Nina she was infertile. Will Dr Lee tell her that’s not what her tests show? Will Dr Obrecht try to interfere with Nina’s testing so a secret doesn’t come out?

Would Dr Lee be able to tell that Nina had delivered a full-term baby before? It does leave certain signs on the uterus, so perhaps some big news could be coming Nina’s way. We’ll see. Fingers crossed that Dr O doesn’t meddle with the results and ruin Nina’s baby-making plans.

Don’t miss a moment of the Tuesday March 22 GH and then come back to CDL for more detailed “General Hospital” spoilers and news.