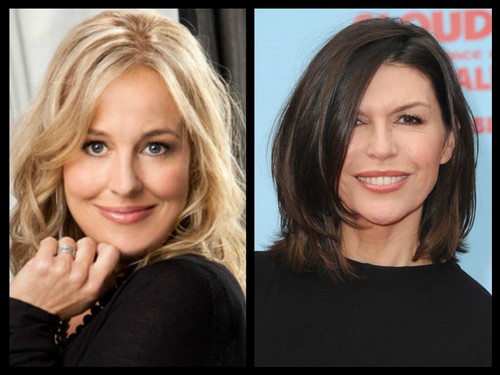 “General Hospital” (GH) spoilers reveal on new episodes this week that Anna Devane (Finola Hughes) and Laura Spencer (Genie Francis) have exciting new storylines coming and will be sticking around Port Charles for at least a couple of years with their latest contract renewals.

Now that Griffin Munro (Matt Cohen) has outed himself as Duke Lavery’s (Ian Buchanan) son, expect lots of bonding between Griffin and his pseudo-stepmom. Now that both have lost Duke and since Griffin’s own mom has passed away, Griffin and Anna only have each other.

General Hospital spoilers know that this storyline will get deeper once Griffin reveals himself as Duke’s son to Sonny Corinthos (Maurice Benard) and a plan coalesces for them to take down Julian Jerome (William deVry) who was ultimately responsible for Duke’s death.

We also know Carlos Rivera (Jeffrey Vincent Parise) will be back in town soon and that will weave into Anna’s storyline with Griffin and Sonny. They will all be in agreement that Carlos should be used to put Julian away rather than targeting Carlos himself even though he was the trigger man that killed Duke.

Beefing up this storyline soon according to GH spoilers will be the return of Emma Drake (Brooklyn Rae Silzer) as Anna’s granddaughter. Emma was very fond of “Uncle Duke” and can give Griffin a child’s perspective on the father he never knew. Look for Emma and Griffin to bond from the get-go.

Also branching out on a new storyline (or two) is Laura. On this week’s episodes, she’ll figure out the lock that fits the key that Helena Cassadine (Constance Towers) left her and what Laura finds leads her to Scotty Baldwin (Kin Shriner) and a possible new adventure on a quest out of town.

But Laura may also have some in-town action with Michael Easton’s return as new guy Hamilton Finn. Some GH spoilers have indicated that Hamilton and Laura may have a date with destiny. This would be a stark change from the last Easton character and love interest with Sam Morgan (Kelly Monaco).

Helena teased that Laura would find a memento of lost love, so there’s a chance for a Cassadine man from her past to return – and more Cassadines equals more trouble. Also look for Laura to stand by son Nikolas Cassadine (Tyler Christopher) when the Hayden Barnes (Rebecca Budig) reveal rocks his world.

In short, there is no lack of storylines for these two strong GH legacy characters and we’re thrilled not only that they’re sticking around – but that they will play prominently in future plots and interact with new and old characters alike to enrich the story tapestry in Port Charles.

What do you think GH fans? Are you excited to see the new action for Laura and Anna? Do you hope these ladies can heal their hearts and find love once again? Share your comments below and come back to CDL often for more “General Hospital” spoilers and news.