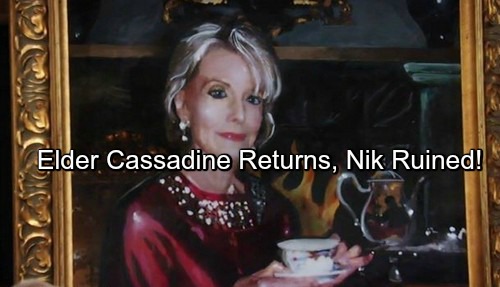 “General Hospital” (GH) spoilers reveal that Nikolas Cassadine (Tyler Christopher) may soon find himself ruined personally and financially if his evil granny’s posthumous scheme works out. Looks like Helena Cassadine (Constance Towers) will punish her grandson from beyond the grave.

Remember when Nikolas and his family watched Helena’s saucy video will? Helena said to Nikolas, “I know just how much of a Cassadine you are… actions speak louder than words.” Then Scotty Baldwin (Kin Shriner) exposed the weird blown up picture of Helena.

General Hospital spoilers remind us that Lulu Spencer (Emme Rylan) was there and said, “she’s just sipping tea” and then Nik had a flashback of Helena choking out her last breath. With that portrait and her acerbic comments, Helena was letting Nikolas know that she knows he poisoned her.

The picture was likely of the moment that it happened. Perhaps since Helena was ailing and knew Robin Scorpio’s (Kimberly McCullough) research failed to save her, she allowed the poisoning to happen so that she could punish Nik after her death.

She was already dying, so why not put her own death to use? Part one of her revenge plan against Nikolas is revealing the poisoning. Part two is that key she gave Laura Spencer (Genie Francis). Laura and Lulu will figure out this week that it unlocks a trunk.

Inside will be a memento that’s a clue to lead Laura to another Cassadine – Stavros or Stefan most likely. Of the two, Laura and Nik would prefer it to be Stefan, but it could be Stavros since he’s much worse. And we know they’re both supposed to be dead, but death is not an obstacle on GH.

GH spoilers claim that this means Nikolas stands to be disinherited because he will no longer be the eldest Cassadine male – and he could also be prosecuted for poisoning his grandmother. If it’s Stefan that comes back, he probably won’t care much that his nephew offed the old witch.

But if it’s Stavros that’s resurrected, he may punish his son for killing his beloved mother. Since Helena bypassed Nikolas and left her personal wealth to the Cassadine Research Foundation, ELQ is all he really has. Remember Nik said Helena and her cronies blew tons of Cassadine cash on their evil schemes…

But in coming days, Nikolas will likely lose control of ELQ as well. Tracy Quartermaine (Jane Elliot) has a secret weapon she’ll unleash soon to unseat Nik as CEO. Likely it’s Ned Ashton (Wally Kurth) who should be able to reclaim his and BrookLynn’s ELQ shares because they were gained by Nik through blackmail.

The bottom line is, Nikolas is on the verge of losing everything – his wealth, the company he controls, and perhaps his freedom too. We have to wonder if Hayden Barnes (Rebecca Budig) will remain true blue when Nik’s world comes crashing down.

Hayden’s day of reckoning is coming soon as well since Sam Morgan (Kelly Monaco) and Liz Webber (Rebecca Herbst) are about to turn up some major dirt on the name-changing scam artist. Will both Hayden and Nik end up in the poorhouse?

If another Cassadine heir shows up as a result of Laura’s upcoming adventure, could Nikolas find himself ousted from Wyndemere as well? It would be kind of amazing to see Nikolas and Hayden living in a cramped room above Kelly’s diner.

Nikolas has never had to fend for himself and has always wielded money, power and influence. It would be a fascinating twist if the new writers ripped away his plush lifestyle and left him having to – gasp – work for a living…

What do you think GH fans? Is Nikolas about to lose everything? Is he on the cusp of a major reversal of fortune? Share your comments below and come back to CDL often for more “General Hospital” spoilers and news.