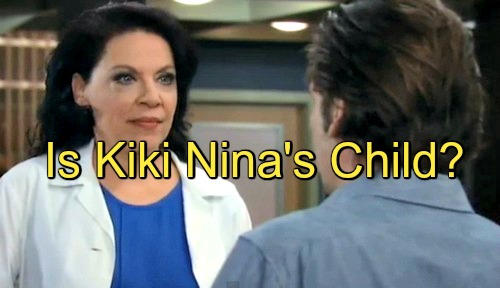 “General Hospital” (GH) spoilers tease that Dr Liesl Obrecht (Kathleen Gati) may have given away something major about her niece Nina Clay (Michelle Stafford) in a recent conversation with Franco (Roger Howarth) about babies.

On a recent episode Franco went to his BFF Liesl to talk about how much Nina wants a baby and how reluctant he is to pass on his damaged DNA to a child. But it was Liesl’s reaction to a remark Franco made that gave us pause and has us thinking the writers handed GH fans a hint at things to come.

General Hospital spoilers point out that when Franco was talking about Nina’s desire to have a child he said, “Luckily she [Nina] already has a baby.” At that point, he had Obrecht’s full attention and she paused and her eyes widened.

Then Franco clarified that Crimson is her baby and Obrecht looked relieved.

There has been speculation for a long time that when Nina was put into a coma by her evil mom Madeline Reeves (Donna Mills), the baby she was pregnant with at the time did not die as a result of a miscarriage but was given to someone else to raise.

Long-simmering GH spoilers indicate that Nina delivered her child while in the coma and her mother gave the baby to Ava Jerome (Maura West) to raise. Kiki’s origin story is that Ava became pregnant from Silas during an affair while he was married to Nina, but is that false?

Silas didn’t know he was Kiki’s biological father until a couple of years ago. Why wouldn’t Ava have revealed the pregnancy to her lover since his wife was out of the picture by then? And another clue is that Silas didn’t use Kiki as a bone marrow donor for her mom and kidnapped a baby instead.

Perhaps Kiki wasn’t a match… That’s an important fact because her other daughter Avery was a match. Not to get too “sciencey” but thanks to transplant advancements, when it comes to bone marrow, children are a haploidentical match for their parents.

GH spoilers explains that’s a 50% match and will work in most cases. But if Silas tested Kiki and found she wasn’t a match, maybe he moved on to Avery and didn’t worry about it. We don’t know the exact details, but would Silas have taken bone marrow from a baby rather than a grown-up if he had a choice?

The Liesl-Franco conversation definitely seemed to hint at a long-suspected outcome in future episodes that Kiki is Nina’s child and Ava has been lying all these years. We know that Madeline is cruel and didn’t want anything to tie Nina to Silas in the event she ever woke from the coma.

A child would have tethered them for life. Since Ava had been having an affair with Silas, passing the baby to her made some sort of sense. And since Liesl and Madeline are sisters, they may have schemed together.

Dr O may have delivered the child in secret then claimed there was a miscarriage. But with Kiki now in the hospital, we’ve got fingers crossed that somehow her medical information will be scrutinized and the reveal will come out.

Perhaps clever Dr Griffin Munro (Matt Cohen) will notice a discrepancy in Kiki’s blood type when compared to Ava’s or some other fact that would lead him to start asking questions. Franco would be thrilled to learn Kiki was Nina’s daughter because that would get him off the baby-making hook.

What do you think GH fans? Did Liesl’s uncomfortable reaction confirm suspicions that Nina does have a child out there – whether it’s Kiki or not? Do you hope Kiki and Nina soon find out they’re mother and daughter?