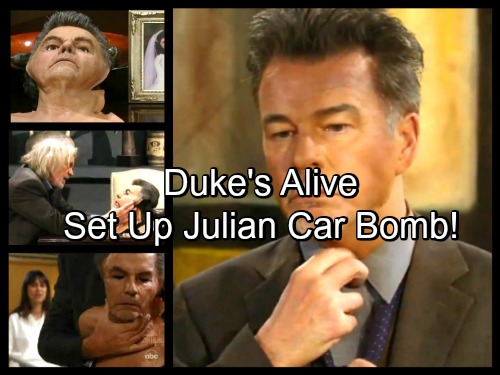 New General Hospital (GH) spoilers showed that Julian Jerome (William deVry) is being blackmailed by someone that he thinks is Oscar Jessup – only Jessup died years ago according to everyone who knows about the Jerome mob organization. But is that just a fake name to cover who’s behind this all?

Julian hired Curtis Ashford (Donnell Turner) to find evidence to tie Sonny Corinthos (Maurice Benard) to the car bombing but that’s not where the evidence took him. Somewhere along the way, Julian was contacted by the real perpetrator and threatened with another attempt on his life.

This is why Julian fired Curtis and shut down the investigation. The person masquerading as Oscar put a major scare into Julian to make him do what he wants. But is “Oscar” really Duke? Consider this. Duke has been replaced by an imposter in the past.

Jonathan Paget (Greg Beecroft) masqueraded for a time as Duke and fooled everyone even though he looked nothing like Duke and had no Scottish accent. He and Duke sent years in a Turkish prison together swapping stories so he told a plastic surgery lie and was very convincing.

But that wasn’t the only Duke masquerade. Cesar Faison (Anders Hove) masqueraded as Duke wearing a very lifelike mask and in that disguise, killed both Bernie Abrahms (Richard Fancy) and Jason Morgan (then-Steve Burton).

It was Robin Scorpio (Kimberly McCullough) that realized that it wasn’t Duke but Cesar. It’s also important to note that Duke wasn’t acting like himself in the months before he died. Why would the real Duke have every taken up with Lucy Coe (Lynn Herring)?

So when Duke “died” in Anna Devane’s (Finola Hughes) arms more than a year ago, it’s quite possible that it wasn’t Duke but an imposter since it’s been done so many times before. If Duke didn’t die that night, it could very well be him back in Port Charles and punishing Julian.

Remember that Larry Ashton (Hugo Napier) had a copy of the mask on a flash drive with directions on how to create them. The technology is around and with the history of mask making and wearing on GH, it’s totally possible they are exploring this plot again.

If Duke is back, him loading a bomb on Julian’s car in revenge for having him (his impostor) shot is plausible. Even if it was a fake Duke that was shot, Julian didn’t know that. He thought he was killing the real deal. A Duke return would be amazing for many reasons.

Griffin Munro (Matt Cohen) never got to know his father, so that would be a big deal. Also, Anna needs love back in her life and she, Duke and Griffin could bond as a family. The writers seem to be exploring legacy characters lately with the return of the Cassadines, Laura Spencer (Genie Francis) and Anna.

What do you think GH fans? Would you like to see Duke return and be the one who is manipulating Julian from behind the scenes and making him scared for his life? Share your comments below and check back with CDL often for the latest General Hospital spoilers and news.