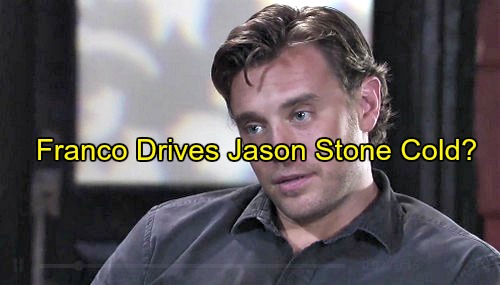 “General Hospital” (GH) spoilers reveal that we can expect the rivalry between Jason Morgan (Billy Miller) and Franco (Roger Howarth) to heat up once again on new episodes this week – and it’s all about Liz Webber (Rebecca Herbst) and Jake Spencer (James Nigbor).

While Jason at first seemed grateful to Franco for helping with Jake and alerting them to the dangerous signs he saw during art therapy, now Jason seems to want Franco gone from their lives. How much did Sam Morgan (Kelly Monaco) tell Jason about his past with Franco?

If you don’t know your GH history, sociopath Franco (pre-tumor removal) was obsessed with Jason and, at one point, people thought Jason and Franco were twins. Then there’s the whole mock rape thing with Sam that led people to think Danny might be Franco’s son.

But now that Franco had his killer tumor removed, General Hospital spoilers show that he truly seems to be a changed man. Jason, too, is changed – and both are different people because of “adjustments” to their brains. But does Jason see himself as somehow superior to Franco? Seems so…

But, in fact, Jason may have killed just as many people on GH as Franco or possibly more. And while Franco was killing for fun or sport, Jason was doing it for business purposes in most cases. Either intention results in a corpse, so is one worse than the other?

We noticed Jason trying to give Liz orders when it comes to their son’s treatment. But Jason has no standing to tell Liz how things should go. Sure he deserves some input as Jake’s dad, but he’s not Liz’s hubby and doesn’t get to leverage her like that.

And, since Jason chose Sam, Liz seems to be flexing her independence and standing up for herself when Jason tries to overrule her. Plus, Franco has been instrumental in helping Liz gain the confidence to stand on her own two feet.

Because of what Liz did to Jason with the big Jake Doe lie, she felt so guilty that she didn’t think she could speak up. This left Jason able to do what he wanted because she wronged him terribly. But Liz has apologized and Jason is guilty of many sins himself, and much worse ones.

So when Liz pushes to have Franco involved in figuring out the sick Jake journal that Helena Cassadine (Constance Towers) left her, General Hospital spoilers say look for Jason to continue being snarky and Franco to give it back as good as he gets.

The problem is, Jake seems to like Franco a lot – and opens up to him more than he does his parents. Franco sees a lot of similarities between himself and Jake, and Franco has a childlike verve about him that appeals to Jake.

So even if Jason wants Franco out, both Liz and Jake will push to keep him in their lives. If that’s not bad enough, we can expect Franco to prod Jason at every possible moment. But could Jason get fed up and turn Stone Cold and go after Franco?

Jason is like a tiger on a leash. Franco is lurking just out of reach and teasing him, under the assumption that the leash will hold. But will it? GH spoilers ask if Jason will snap and threaten Franco? And if Jason goes off on Franco in front of Liz and Jake, will his ex and son take Franco’s side?

Could Jason alienate his troubled son by coming after the one adult that Jake seems to totally trust? Does Jason have to put aside his feelings about Franco? And, consider this, Jason has no memories of his past animosity with Franco.

Anyone that fills him in on their sordid past is looking to make trouble. After all, Carly Corinthos (Laura Wright) is hoping Jason will kill Franco. Is Jason being manipulated by those who were hurt by Franco and want revenge?

Does Franco deserve a pass on his history of violent behavior because he’s been cured? Share your comments below and come back to CDL for more “General Hospital” spoilers and news.