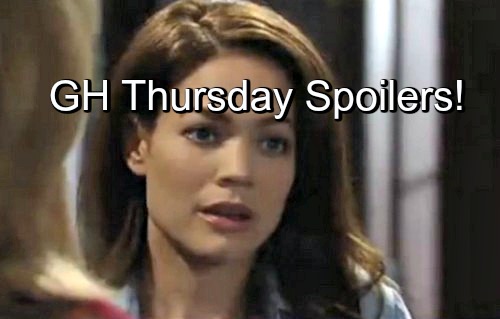 “General Hospital” (GH) spoilers reveal that Michael is focused on saving Sabrina on tomorrow’s episode, Thursday, March 24 plus Liz discovers Hayden’s secrets, Lulu and Laura make progress on the Helena mystery, Anna and Griffin talk, and Parker is back in Port Charles.

Michael Quartermaine (Chad Duell) goes to Felix DuBois (Marc Samuel) with a major reveal. Mikey tells him that Carlos Rivera (Jeffrey Vincent Parise) is alive and has Sabrina Santiago (Teresa Castillo) with him. What will Felix think? Will they try and call Sabrina?

Is Michael planning on going after Sabrina and saving her from Carlos? Anna Devane (Finola Hughes) also seems to have Carlos Rivera (Jeffrey Vincent Parise) on the brain as she talks with Griffin Munro (Matt Cohen) about Duke Lavery (Ian Buchanan).

Griffin notices Anna seems to be plagued by guilt and brings it up. Anna gets uncomfortable with the situation. General Hospital spoilers ask will she hold back that she shot Carlos in cold blood (or so she thought) to avenge Griffin’s dad – or will she keep her crime to herself for now?

Professor Parker (Ashley Jones) startles Kristina Corinthos (Lexi Ainsworth) by showing up at her house and then Kristina shocks Parker when she tries to shut the door in her face. Parker stops Kristina because she wants to talk – looks like she’s not angry at all.

Does Parker know that Max Giambetti (Derk Cheetwood) was on campus? Or is this about Parker not being able to stop thinking about her? Kristina acts on impulse with Parker – will she kiss her? Is this a new romance starting or more trouble?

GH spoilers indicate that Kristina will struggle with her feelings for Parker. How will this play out and could Parker stick around for more than a visit? And did Max really leave campus at Kristina’s request – or did he already find out Parker is a woman before he got the call?

General Hospital spoilers show Maxie Jones (Kirsten Storms) slapping someone and telling them she hates them. Is that her being dramatic for some reason? Or is it Nathan West’s (Ryan Paevey) nightmare of what might happen if he reveals he was married to Claudette?

Hayden Barnes (Rebecca Budig) is flustered when she comes to pick up legal papers from Diane Miller (Carolyn Hennesy) at the MetroCourt. What did Hayden want added on to the contract? Is it something to help her leverage Nikolas Cassadine (Tyler Christopher)?

Diane looks like she has some questions for her shady client. Hmm… Also, Liz Webber (Rebecca Budig) is stunned by the face she sees on the laptop when she clicks to see images of Naomi Dreyfus-Berlin. Obviously it’s someone she knows, but whom?

Is Hayden related to someone from Nikolas’ past? Perhaps Emily? How bad is Hayden’s secret? It’s enough to drop Liz’s jaw and when Lulu Spencer (Emme Rylan) and Laura Spencer (Genie Francis) show up at Wyndemere, they find Liz in stunned silence.

Will Liz tell them Hayden’s ugly truth? Or does Liz feel like Nikolas deserves to hear it first? And who did Nikolas call to meet him after his talk with Laura? Hope it wasn’t Diane or she might mention the legal papers she was working on for Hayden…

Looks like Lulu and Laura will go on a hunt in the nooks and crannies of the Cassadine castle to find the trunk that key fits. Is it the same trunk that Stefan Cassadine had with Laura’s engagement ring and some of her party dresses? What’s in it?

All this and more on the Thursday March 24 episode of GH. After you check out the ABC soap, come back to CDL for more “General Hospital” spoiler and news.