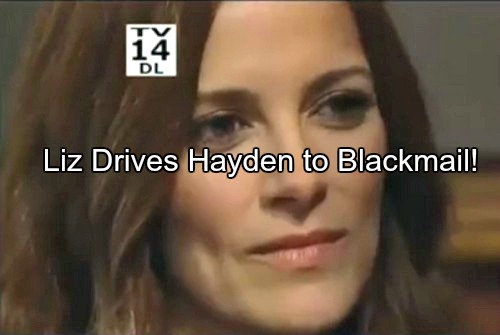 “General Hospital” (GH) spoilers reveal that Hayden Barnes (Rebecca Budig) will be exposed on an upcoming episode and will scramble to keep her secrets from coming out. Hayden makes some ugly accusations about Liz Webber (Rebecca Herbst) to try and draw the heat off herself – and it’s all about her hubby.

We all know that Liz and Nikolas Cassadine (Tyler Christopher) had a significant relationship at one point (or more than one point to be specific) and there was definitely love there. But that love seems to have solidified into friendship, nothing more. But Hayden may not see it that way.

Whether Hayden truly believes that Liz wants Nikolas or not, General Hospital spoilers say it’s a good topic for her to throw some shade at Liz to try and take the focus off the Naomi Dreyfus and Rachel mystery of her background.

Look for Liz to overhear Hayden talking and she reveals something big on this week’s episodes.

When Liz calls her on the dirty secret, we’ll soon see Hayden go on the offensive to try and shut Liz down and keep her from going to Nikolas or, even worse, Sam Morgan (Kelly Monaco) who seems to be hot on Hayden’s trail and about to bust her secrets wide open.

Hayden will accuse Liz of trying to discredit her in her hubby’s eyes so she can have Nikolas all to herself now that Jason Morgan (Billy Miller) has kicked Liz to the curb in favor of Sam. Hayden will push all of Liz’s buttons to try to make this a fight about men – not about her secrets.

Will it work? Are Liz’s wounds over the Jason dumping still so fresh and raw that she will respond to Hayden’s vitriol and get sidetracked from the secrets she’s uncovered? Will the catfight succeed in getting Liz off topic? Or will Liz run to Nikolas or Sam anyway and spill the beans?

GH spoilers reveal that on Friday episodes, March 25, Nikolas will get some shocking news. Is it the ugly truth that Liz discovers? What’s of interest is that Liz wasn’t even looking for dirt on Hayden when she found it – and it’s Hayden’s fault for talking out loud where she could be overheard.

In coming days, we’ll see Hayden resort to blackmail to protect herself after another ugly confrontation with Liz next week. But what is the subject of the blackmail? Hayden knows Nik had her shot – but what she may also know is both Liz and Laura Spencer (Genie Francis) knew it.

Doesn’t that make them both accomplices after the fact? Hayden could threaten Nikolas with taking him down plus his mother and BFF if he pushes her too far. Also, there’s that reflection in the tea pot in the portrait that Hayden seems obsessed with figuring out.

Is it an image of Nikolas poisoning his grandma found with the magnifying glass? If so, Hayden has double the dirt to blackmail her hubby with – but will she use it? Nikolas said whatever Hayden’s past is, they could deal with it. But is the truth just too much for Prince Nik to handle?

It’s hard to imagine what would be too much for a Cassadine given they’re a ruthless, murdering, back stabbing lot. But if Hayden’s past ties to someone Nikolas cares about – and she hurt them – that could prove insurmountable.

What do you think GH fans? Are you excited to see Hayden and Liz in a catfight over Nikolas? Is there some truth to Hayden’s accusations? Does Liz see Nikolas as her plan B now that her relationship with Jason is dead?