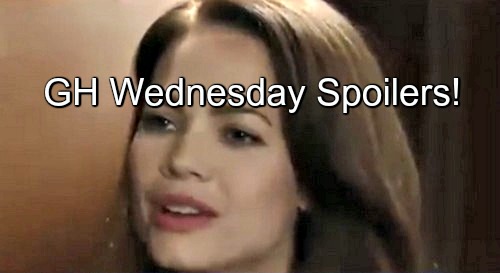 “General Hospital” (GH) spoilers for tomorrow’s episode indicate that Dr Finn sends a lady screaming from his hotel room on Wednesday March 23 plus Tracy has her own screaming fit at GH. Hayden’s caught red-handed and Laura plays detective. All that and more on tomorrow’s GH – here’s what to expect…

Dr Hamilton Finn (Michael Easton) sure looks like a lady killer, but let’s hope that’s not literal. When a maid runs screaming out of his MetroCourt room, Carly Corinthos (Laura Wright) intervenes and is shocked by what she sees.

It’s Silas Clay back from the dead – only not – and Finn explains his bearded dragon Roxie probably scared the girl. General Hospital spoilers as how will Carly react to all of this? Does the MetroCourt have a ‘no reptiles’ policy? Is it okay to pop out your breasts but not your beaded dragon?

Out at Wyndemere, Hayden Barnes (Rebecca Budig) makes the classis soap opera mistake of talking out loud to herself about all her deepest, darkest secrets and, of course, someone overhears. Looks like Liz Webber (Rebecca Budig) listens at the door and hears Hayden in a panic.

This is all about the “Naomi Dreyfus” clue that Sam Morgan (Kelly Monaco) dropped just before Hayden played dumb and kicked her out of the castle. GH spoilers tease that it looks like the name got a big reaction – too bad Sam’s not there to see the fruits of Damien Spinelli’s (Bradford Anderson) labors.

Liz is highly suspicious of Hayden and tells her she should just tell the truth about who she is. No way. Hayden is not the come clean kind of girl. She’s ride or die and is not going to tell Liz a damned thing. Looks like Sam and Liz are on a collision course with the new Mrs Cassadine.

Also poking around Wyndemere soon will be Laura Spencer (Genie Francis) and Lulu Spencer (Emme Rylan). Laura has decided she has to have answers about the key and clues that Helena Cassadine (Constance Towers) left her.

But before she kicks off the scavenger hunt, Laura advises Nikolas Cassadine (Tyler Christopher) not to ignore what his grandma left him. Nikolas wants to wash his hands of the whole thing, but Laura thinks he can’t stop the inevitable and information is their ally.

GH spoilers ask if Nik will go back and try to figure out whose face was in the teapot? Could it be Stefan? Stavros? Another Cassadine we’ve not yet met? Looks like Laura’s search will be fruitful and she’ll find the trunk that fits the key. Is it the chest Stefan had all those year ago?

Kristina Corinthos (Lexi Ainsworth) demands answers from Sonny Corinthos (Maurice Benard) on why he had Max Giambetti (Derk Cheetwood) asking questions at Wesleyan. Kristina gets a surprise visitor and does something unexpected.

Is it Parker (Ashley Jones)? Or is it a guy and Kristina decides to go for a lip lock to see if there’s any chemistry between her and a dude since she’s questioning her sexuality? Parker is back soon and Kristina will still struggle with her feelings for the professor. We’ll see what happens.

Over at GH, Tracy Quartermaine (Jane Elliot) rages and threatens Dr Liesl Obrecht (Kathleen Gati) if she doesn’t find Dr Finn and get him there to start her treatment. Liesl will cave and give in because her entire staff is against her – although that’s not the first time that’s happened.

What do you think? Can Tracy be saved from her brain worms? Is Larry Ashton also infected? What’s with Finn and the lizard? What’s in the trunk Laura finds and how long until Sonny finds out that his daughter offered sex to a lady professor, not a dude?