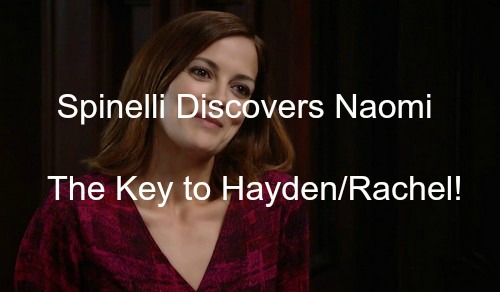 “General Hospital” (GH) spoilers reveal that, once again, it will be The Jackal that proves key to cracking a Port Charles investigation in an episode this week. Sam Morgan (Kelly Monaco) has put Damien Spinelli (Bradford Anderson) on the case and now he’s digging into Hayden Barnes’ (Rebecca Budig) past.

Spinelli will dredge up the name “Naomi” related to Hayden’s alter-ego Rachel. So who is this Naomi and how is she related to Rachel who is nowHayden? Hayden seems to have daddy issues – so is Naomi tied to her past? Is Naomi the mother of Rachel?

General Hospital spoilers say that after Spinelli digs up the name Naomi, he alerts Sam to this new clue and she will try something bold and says the name to Hayden to see if it gets a reaction and boy does it ever.

But it turns out Sam is not Hayden’s worst enemy – Hayden herself plays part of her own downfall.

GH spoilers say that as people like to do on soaps, Hayden will talk to herself about Naomi and she’s overheard. Liz Webber (Rebecca Herbst) is now living at Wyndemere, so it’s not the sparsely populated mausoleum it once was.

It will be Hayden that gives Liz a major clue about her past.

According to GH spoilers, Liz goes and does some digging after hearing “Naomi Dreyfus” from Hayden and Liz figures out the devastating secret that Hayden has been hiding from Nikolas Cassadine (Tyler Christopher) and it’s a doozy.

Liz is ready to expose Hayden’s secret but Hayden is going to go down fighting.

Hayden and Liz will have it out and she will do anything she can to stop Liz from airing her dirty laundry – but no way will Liz stop. The ugly truth comes out in future episodes and Hayden must explain herself to her husband. But how forgiving will Nikolas be?

Looks like he will be hurt and upset even though he promised to let Hayden keep her secrets. But this one is too big to keep. Nikolas will be stunned and left reeling. Will Nik try to cut Hayden loose? GH spoilers indicate that by the end of the month, Hayden will blackmail her new husband.

So what is it that Hayden is hiding? General Hospital spoilers also reveal that whoever Hayden, Rachel and Naomi are that there are ties to other people in Port Charles. Whatever it is, we can’t wait to see it come out and find out the truth about Hayden – no matter how awful it is.

What do you think GH fans? Is Hayden the daughter of a Cassadine enemy? Does she have ties to other legacy families in Port Chuck? Share your comments below and come back to CDL often for more “General Hospital” spoilers and news.