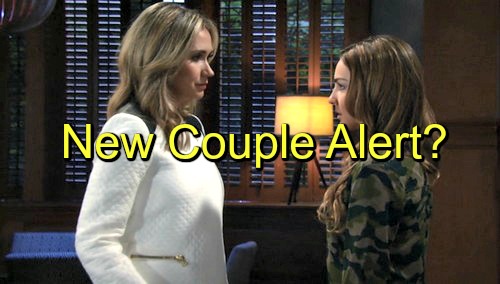 “General Hospital” (GH) spoilers reveal that Professor Parker (Ashley Jones) is back in Port Charles on an episode this week, once again, turns up out of the blue at the home of Kristina Corinthos (Lexi Ainsworth). But why is Parker back? Is this a new couple alert? Will Port Charles get a female same-sex couple?

When Parker first showed up at Alexis Davis’ (Nancy Lee Grahn) house, it was to confront Kristina over what she thought was her posting negative teacher reviews about her on a college website. Kristina said it wasn’t her (but maybe it was) and Parker left after some talk about her being happily married.

So General Hospital spoilers ask why is Parker back this time? We know that Sonny Corinthos (Maurice Benard) sent Max Giambetti (Derk Cheetwood) to Wesleyan to check out the professor whom Sonny assumed was a man that had ratted out his daughter for making a sexy offer in exchange for grades.

Is it Max poking around on campus and asking about her that prompts Parker to come see Kristina to ask why her dad’s mob thugs are on the Wesleyan campus looking for her? GH spoilers ask if Parker is worried that Sonny’s men are a threat to her and has come to get Kristina to call them off?

Or is Parker there to break news that she and her wife are split? GH spoilers reveal that Kristina will do something impulsive. Is she going to kiss Professor Parker and come clean that she loves her? Will Kristina’s parents catch her with Parker?

Will Kristina be outed soon because her parents catch her hands-on with her older lady crush? How will Sonny handle the hard truth that his little girl isn’t into dudes and instead seems to like not only the ladies, but a much older lady?

Is Sonny going to freak out? General Hospital spoilers reveal that Alexis will be very understanding, but we know that about Kristina’s mom. After all, she popped out her milk makers in a trial this week to stand up for women’s rights, so of course she’ll be supportive of Kristina’s right to choose who she loves.

What do you think GH fans? Is Parker in Port Chuck to admit she has feelings for Kristina? Or is this about the mob presence on the Wesleyan campus directed towards her issues with Kristina? Does Parker think Kristina is trying to intimidate her with her dad’s criminal ties?

Will Parker and Kristina get closer or will Sonny’s actions push them farther away from one another? And how will Kristina react knowing her dad sent Max to Wesleyan to poke around in her private life? Share your comments below and come back to CDL often for more “General Hospital” spoilers.