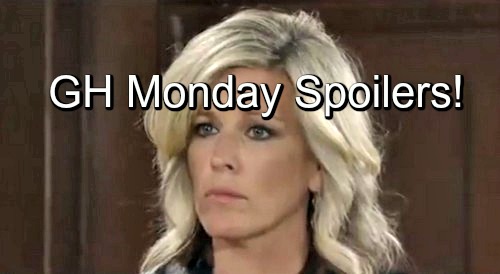 “General Hospital” (GH) spoilers reveal more trouble at Crimson plus chaos at the courthouse on Monday March 21. Plus we meet Michael Easton’s new character, Curtis and Valerie get serious, and there’s a doctor showdown at GH over Tracy!

Nina Clay (Michelle Stafford) has some major issues with her magazine but she may also have trouble with the law. Dante Falconeri (Dominic Zamprogna) shows up waggling his handcuffs at Nina and Maxie Jones (Kirsten Storms). What is that about?

Is this because Nina had reams of magazine pages dumped in public places without a license? Nina does have a clean-up team scheduled, so maybe she’ll be able to talk him out of it. Also, Curtis Ashford (Donnell Turner) is there – will Dante’s visit overlap with this?

What will Dante think if he sees Curtis and Valerie Spencer (Brytni Sarpi) looking all happily messy and coupled up? Will he say something to protect Val and irritate them? Plus, GH spoilers indicate that Nina will hire Curtis to work for her soon.

Nina comes up with a plan to catch the Crimson saboteur – will she enlist Curtis to tackle the task of finding out who’s tanking her magazine? Also, Valerie wants answers from Curtis about why Jordan Ashford (Vinessa Antoine) hates him. What will we find out about their past?

Carly Corinthos (Laura Wright) is not happy that the breastfeeding lawsuit is derailing her hotel’s business. Carly advises Olivia Falconeri (Lisa LoCicero) to end this now before their business is ruined. Instead, look for Alexis Davis (Nancy Lee Grahn) to rile up Carly to take their side.

Mayor Lomax (Shari Belafonte) will not know what hit her when all three baby mamas of Sonny Corinthos (Maurice Benard) align against her. Looks like Carly’s involvement and her ability to play hardball will tip the scales in favor of Olivia and Alexis.

Over at the hospital, we’ll get our first glimpse of Michael Easton’s new character. Does he show up because of Tracy Quartermaine’s (Jane Elliot) illness? Tracy Q is certain she’s on the threshold of death’s door but Monica Quartermaine (Leslie Charleson) has kind words.

Monica tries to comfort her and says she won’t let her die but Tracy is certain she’s done for. Dillon Quartermaine (Robert P Watkins) is worried about his mom’s prognosis and calls Ned Ashton (Wally Kurth) and tells him to get back to Port Chuck now.

Tracy’s lab results are back and Dr Doom – aka Dr Mayes (Matt Riedy) – isn’t happy to see that Dr Griffin Munro (Matt Cohen) has gone behind his back to ask lab manager Brad Cooper (Perry Shan) to see the tests so can offer a second opinion.

Mayes blows up at Griffin and Brad – will he threaten to get them fired? Will Marcus come to the defense of Dr Hottie and bad Brad? Looks like we’ll have to wait another day to find out what the test results say – this is just a showdown over who has the right to look at them…

Don’t miss any of next week’s Monday, March 21 GH episode – and be sure to check back with CDL for the week in advance “General Hospital” spoilers coming soon.