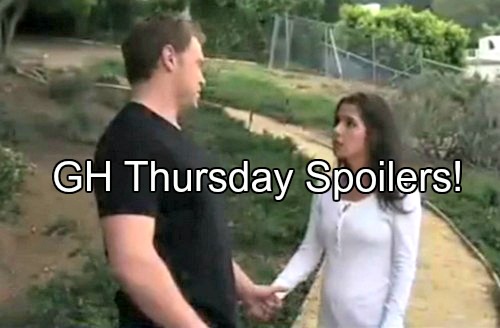 “General Hospital” (GH) spoilers tease that Nathan realizes he needs to tell Maxie the truth on tomorrow’s epsiode, Thursday, June 2, while Finn surprises Hayden with a visit. Dr. Obrecht steps up her accusations, Liz tries to save Jason while taking out a nemesis, and the Morgans plan to flee Port Charles.

Nathan West (Ryan Paevey) needs to learn to muzzle himself because he’s been talking in his sleep again. Last time it was him saying he loved Claudette (Bree Williamson) and this time, GH spoilers warn that  he sleepily confessed to a shooting. When he wakes, Maxie Jones (Kristen Storms) asks him about it.

When Griffin Munro (Matt Cohen) comes to sign papers to release Nathan, he notices the PCPD detective is giving him weird looks. General Hospital spoilers ask if Nathan has finally realized where he knows his doctor from? Is Nathan worried that Griffin will turn him in for shooting him?

Nathan and Maxie go home and he sits her down to make a full confession. What will Maxie think? Was the shooting about Claudette’s cheating or something else? Will this make Maxie wonder if she and Nathan need to pump the brakes on their wedding plans?

Of course, Dr O has no proof but will list off the circumstantial evidence. Carly won’t like what Liesl is saying but needs to go comfort her mom Bobbie Spencer (Jacklyn Zeman) who, according to GH spoilers, has a big decision to make. Is this about Lucas’ life support?

Lucy Coe (Lynn Herring) is jealous of Kevin Collins (Jon Lindström) and Laura Spencer (Genie Francis) getting closer and will soon call in a reinforcement to help her scheme to get Kevin back. GH spoilers are swirling that it’s CeCe – aka Christina Baldwin.

Over at the PCPD, Liz Webber (Rebecca Herbst) is making accusations of her own, also with no proof. Liz tells Jordan Ashford (Vinessa Antoine) that Hayden Barnes (Rebecca Budig) had motive to kill Nikolas Cassadine (Tyler Christopher) because of the diamonds.

Will Liz tell Jordan that Nikolas tried to murder his wife? That makes Hayden look guiltier, but could bite Nikolas if he ever comes back (which we all know he will). What will Jordan do? GH spoilers tease Jordan will let the FBI know that Hayden was hiding assets.

Sam Morgan (Kelly Monaco) and Jason make plans to skip town so he’s not arrested since they don’t think the PCPD is making a legitimate effort to find out who really attacked Nikolas. But where will they go? General Hsospital buzz indicates they’ll head off to investigate – possibly on Cassadine Island.

Out at Wyndemere, Finn shows up and Hayden answers the door. Is he there to see her? Is Finn returning the check she gave him to try and make up for some of the damage her father did? Finn notices things are off kilter on Spoon Island and asks what’s going on.

Hayden will find Finn in bad shape on Thursday’s epsiode and will try to help him – but is that at Wyndemere or after he leaves? Is Finn having another of his lizard man fits where he needs to shoot up his yellow drug? Does he have them on him or will Finn need Hayden’s help to get to his meds?

Share your comments below on all the action going down on GH on Thursday, June 2, and check back with CDL often for more “General Hospital” spoilers and news.