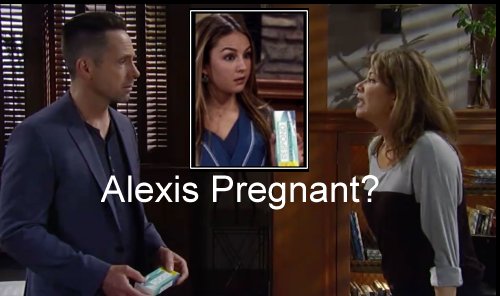 Could this really be where GH is heading or is this a misleading promo to fool us into thinking there’s a Julexis baby? Alexis thought she was faking pregnant to entrap Julian into a murder confession but this teaser trailer implies otherwise.

The video calls this “The most unexpected summer twist yet” but that doesn’t mean that Alexis will soon be rocking a baby bump. The video shows Kristina Corinthos (Lexi Ainsworth) with a pregnancy test in her hand asking who it belongs to.

Kristina waggles it and asks “who might be having a baby?” Molly Lansing (Haley Pollos) immediately says, “It’s not mine, is it yours?” Once the girls decide it’s not one of them, they turn to Alexis and ask, “Mom, could you be pregnant?” 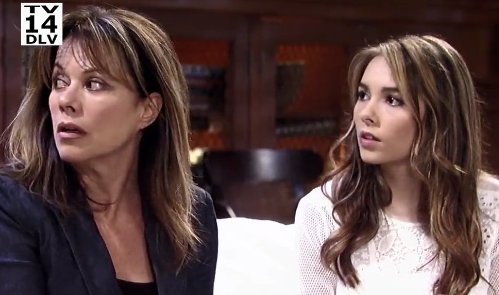 Logically, and based on GH history, Alexis should NOT be pregnant since GH went through a major menopause storyline with her about five years ago. No way should she be having a baby. However, General Hospital spoilers show us that past history and present storylines don’t always mesh.

After all, Jake Webber (Hudson West) is back from the dead and so is Jason Morgan (Billy Miller), so all bets are off when it comes to story consistency in Port Chuck. That being said, there are two much more reasonable explanations for this promo.

First, is that Kristina found the pregnancy test box that Julian gave to Alexis to take (the brands are the same – see pic above). Alexis and Anna Devane (Finola Hughes) may have planned for Julian to demand proof of pregnancy and had a positive test ready to go.

Alexis could have then chunked the box that Julian gave her in the trash, handed Julian the pre-peed on test and Kristina found the box in the trash. Another possibility that is far more intriguing, though, is that it could be Sam Morgan’s (Kelly Monaco) pregnancy test. 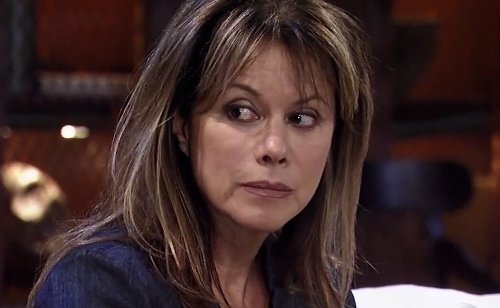 Perhaps Sam took a test while she was at her mom’s house since she’s there often. Sam might be pregnant with Jason’s child but hasn’t told him because of the Nik murder charge. GH fans have been clamoring for Sam and Jason to have baby #2, so that would be amazing.

What would NOT be amazing is if the writers have created a miracle menopause baby for Alexis to carry. That would be so not cool. General Hospital spoilers tease that Julian will not spend the rest of his life in Pentonville, so a Julexis baby would complicate things nicely.

However, given Alexis’ known medical storyline of being well past her fertility prime, it would be kind of ridiculous to revive her ovaries like the writers brought Jake and Jason back to life. We’ll see. What do you think GH fans?

Do you think Alexis could really be pregnant or is this trailer to generate a whole lot of excitement for nothing? Could Sam be pregnant? Would you cheer for a JaSam kiddo?