General Hospital Spoilers: Who is Rachel, Sweeps Reveal Hayden’s Identity – Is Michael Easton’s New Char Part of Her Past? 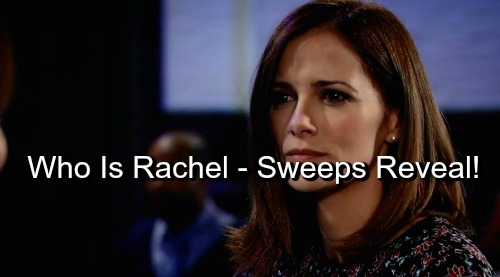 “General Hospital” (GH) spoilers indicate that once Hayden Barnes’ (Rebecca Budig) identity is revealed, there will be a number of lives impacted – over and above that of her new husband Nikolas Cassadine (Tyler Christopher).

We also have to wonder if her past coming out just as Michael Easton is coming back as an all-new character means that he could be part of the Hayden Barnes storyline. There’s been speculation he might be a bad guy…

What we know as of now is that Hayden’s real name is Rachel and she’s got a tie to the man in Vegas called Baxter Corbin. Rachel also has a major scandal in her past and Tracy Quartermaine (Jane Elliot) knows what it is.

If you recall the heated discussion between Tracy and Hayden at the MetroCourt where she called Hayden “Rachel” there were some more tidbits there as well. Tracy said, “You changed your appearance… you stopped associating with your former cohorts…”

Tracy then added, “I’m going to start making some phone calls. The first one is to a certain J Dover.” This conversation was what inspired Hayden to propose to Nikolas – and even though he declined, that started the ball rolling that landed them in Vegas saying “I do.”

And that led to the run-in with Baxter Corbin – the guy who called her Rachel – and after Hayden told him not to tell anyone he saw her, he did anyway. He called someone and said, “You’ll never believe who I just ran into in Vegas.”

Was Corbin calling the mysterious J Dover? And we have to ask why use Corbin for the guy’s last name? It’s unusual – and also the last name of Sonny Corinthos’ (Maurice Benard) biological father Mike Corbin. We’ve already met one secret kid of Mike’s – Courtney Matthews – is Baxter another?

Tracy revealed that she found info about “Rachel” searching online and said it’s out there if you know where to look. Next week, Nikolas will begin looking online after he wonders if Hayden is being dishonest with him. Will Nikolas find the right corner of the web as well?

Is Rachel a completely new character? Or is she one of the past two Rachels from GH history resurrected? One supposedly died and the other is in a coma last we saw. Both were doctors at GH with major scandals in their past.

When Hayden talked to Baxter Corbin, it didn’t seem like they were intimate in a past life – more like they were associates of some sort. With a last name like Corbin – that screams mob and gambling. If he’s relate to Mike Corbin and got Mike’s shady genes, Baxter could be trouble.

And since Hayden provided her new name to Baxter and he made that call, maybe to P Dover, will a new face turn up in Port Charles looking for her soon? Can Nikolas shelter Hayden from her past once the Rachel reveal comes out? Or will he turn on her for lying?

As far as Nikolas knows, Hayden doesn’t know he had her shot. But she does and she has the evidence that could put him away for attempted murder. No matter how stunning her Rachel reveal is, Nikolas isn’t in a position to judge her harshly – he’s got a terrible past of all sorts of crimes.

So just who is Rachel? GH spoilers indicate the ugly truth about Hayden’s past will come out during February sweeps – and Hayden is clearly in an inescapable mess. Hayden is being blackmailed by Tracy, but has fallen for Nikolas. We’ll soon see Hayden refuse to cave to Tracy’s demands.

This could push Tracy into revealing her secrets to Nikolas – who may or may not already know the sordid truth by then. Will Easton turn out to be the Dover guy Tracy threatened her with? And which lives in Port Charles will be rocked by the Rachel reveal?

Nikolas, of course, will be impacted and perhaps Sonny as well if Baxter is a new shady brother he’s never heard of. And if Rachel is a resurrection of one of the two former Rachels, that would impact the Quartermaines, Cassadines, and many others.

What do you think GH fans? Are you excited to find out who Rachel really is? Do you think Nikolas will forgive her for lying about her past or will Hayden have to blackmail him with her knowledge about the hit on her life to get him back on her side? Do you hope Easton is part of the reveal?

Share your comments below on who you think Rachel might be and check back with CDL often for more “General Hospital” spoilers.