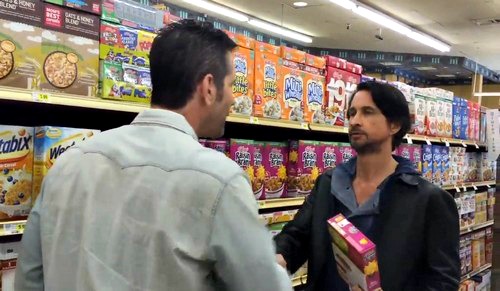 “General Hospital” spoilers just revealed by showrunner Frank Valentini revealed that Michael Easton will be back soon for February sweeps. This is major news for GH fans that have mourned his loss since Dr Silas Clay took an unexpected knife in the back compliments of Madeline Reeves (Donna Mills).

But how could Easton be back? And will he back as Silas? Another McBain sibling? An evil triplet perhaps?

The bottom line is – no matter how they bring Michael Easton back – new character with a familiar face or Silas doppleganger – GH fans will be thrilled to have him back. Fans were crushed and outraged when Silas was killed out of the blue.

Perhaps GH showrunners are offering a reprisal Easton appearance to give GH fans some much needed closure. Usually when someone dies on GH, you see it coming. Silas Clay’s death was a shocker that came out of the blue.

Many blamed it on then-head writer Ron Carlivati, but it didn’t matter why. Before we knew it, Silas was gone and Kiki, Nina, Ava – and a legion of fans – were crushed. Perhaps this Fan February cameo will make it a little better.

What do you think GH fans? Are you thrilled to have Michael Easton back even if it’s only for an episode or two? Remember last February, Courtney Matthews was back for a ghostly visit to Spencer Cassadine (Nicolas Bechtel) so perhaps this is the same idea.

Update: Nathan Varni Tweeted important info – Michael Easton is returning in an all new role – this means he could be around permanently and at this point could play any type of character! 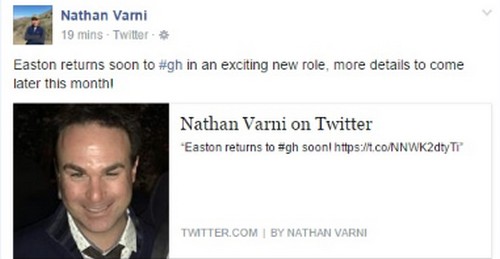 We can’t wait! Share your comments below and come back to CDL often for more “General Hospital” spoilers and news.

announcement from Frank Valentini on Vimeo.