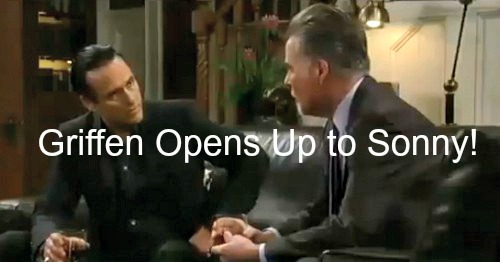 “General Hospital” (GH) spoilers reveal that now that Griffin Munro (Matt Cohen) has worked up the nerve to introduce himself to Anna Devane (Finola Hughes), the next Port Charles resident he owes a proper introduction to is Sonny Corinthos (Maurice Benard).

Of course, Sonny and Griffin already bonded early on when they spoke in the hospital chapel but there’s so much more there to be explored between Griffin and Sonny. When Sonny felt immediate kinship with Griffin, we wondered and now we know it’s because of Duke Lavery (Ian Buchanan).

General Hospital spoilers remind us that Sonny trusted Duke like a brother and even left his mob biz in Duke’s hands while Sonny was at Pentonville for the killing of AJ Quartermaine. And it was this that led to Duke’s death – but we can’t really blame Sonny for Duke’s shooting – the groundwork was laid for that event long ago.

Since Griffin never knew his father, GH spoilers claim he likely doesn’t know his path in the criminal world – and his struggle to go legitimate for Anna. When Griffin talks to Sonny about his father Duke, GH spoilers indicate that he’ll have a lot of questions.

Between Anna and Sonny, they can fill in a lot of the gaps and give him a picture of who his father was, the life he led, and choices he made. Like Anna, we can expect Sonny to be thrilled to have a piece of Duke back in his life.

GH spoilers warn that inevitably, Sonny or Anna (or both) will have to tell Griffin the story of Julian Jerome (William deVry) and how he was the one responsible for his father’s death and Duke’s long and complicated (and violent) history with the Jeromes.

Also of interest is Griffin’s past which seems to also have some violence there. Maxie Jones (Kirsten Storms) called Griffin out on his abdominal bullet wound scar – so we have to wonder what that is about.

Does Griffin have a violent past of his own? Did Griffin unknowingly channel some of his dad’s criminal tendencies? We don’t know who Griffin’s mother is but we do know she was uber-religious. Did Griffin rebel against his traditional mom and go find trouble?

Likely as part of Griffin’s conversations in future episodes with Sonny and Anna about Duke’s past, he’ll reveal some of his own. Let’s just hope that whatever wild side of Griffin that may have come out when he was younger and got him shot is long gone.

Griffin seems to be a wonderful doctor and the best part of Duke. Of course, Duke had a tough legacy of crime and violence in biological father Angus McKay that he never could quite overcome. Hopefully Griffin won’t inherit a legacy of violence from Duke.

What do you think GH fans? How will Griffin handle talking about Duke with Sonny – and how will it go when Griffin has his first run-in with Julian? Will Julian’s role in Duke’s death impact how Griffin deals with Ava Jerome (Maura West) at the hospital?