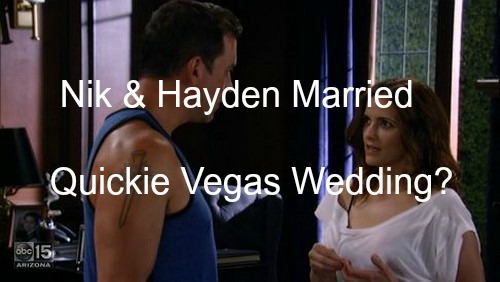 “General Hospital” (GH) spoilers from a script leaked on Instagram by Ryan Paevey hint that a quickie Vegas wedding is in the works for February sweeps. Looks like Hayden Barnes (Rebecca Budig) may lure Nikolas Cassadine (Tyler Christopher) to Las Vegas to get hitched.

The cover of the script clearly shows Ryan Paevey’s name (aka Nathan West) and shows two locations for the shooting which looks to last several episodes. The sets are Port Charles and Las Vegas. Now that info alone doesn’t scream “wedding” but there’s more!

If you look at the Cast list on the left column, 10 names down, right below “Jason” is a partially obscured name that ends in Windsor. You can only see O and P for the first name. Thing is – that’s not a name, it’s a title JOP – as in Justice of the Peace. 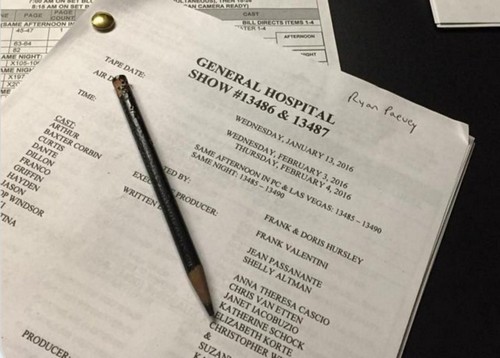 In case you don’t know, that’s the title of the official that performs civil wedding ceremonies – and Vegas is the king of weddings. And this wouldn’t be the first time GH used Vegas as a wedding destination. Brenda and Jason got married there back in 2002.

Ethan and Maya got married there in a drunken incident and Tracy Quartermaine (Jane Elliot) woke up in Vegas to find herself married to Luke after a night of boozing. But why would Nikolas agree to a quickie Vegas wedding? The answer – to stay out of jail for murder.

Hayden is on the cusp of discovering, thanks to Curtis (Donnell Turner), that Nikolas was the one who hired the hit man who put the bullet in her brain. GH spoilers indicate that she’ll blackmail Nik once she finds out what he did to her.

Plus, Hayden herself is being blackmailed by Tracy who knows Hayden’s dirty secrets and gave her one month to get ELQ or she’d expose her. Tracy made the threat on the January 8 episode and the Vegas episodes start February 3 – right up against the 30 day deadline Hayden has to steal ELQ from Nik.

We know Hayden is already thinking about marriage as the best tool to get the ELQ stock she needs – she proposed to Nikolas the day he was released from the hospital. He said no to marriage because they need to take their time even though she explained it could help him secure ELQ.

However, GH spoilers also reveal that once they get back to Wyndemere, Hayden will take Nikolas to bed – even though she’s been holding out for months – to try and seal the deal. When logic and sex fail to get the results she needs, blackmail is a good fallback.

Once Hayden finds out Nikolas tried to have her killed, she’ll want to ditch him, but she’s still got Tracy’s threats to deal with – so she’s got to stick with him. Hayden offered before to wed Nikolas with a pre-nup, but with proof that he had her shot in her pocket, she can push for marriage without one.

The only other couple in Port Charles talking marriage right now is Alexis Davis (Nancy Lee Grahn) and Julian Jerome (William deVry) – but neither Alexis nor Julian are on the cast list. Hayden is definitely on the list – and Nikolas’s name would be too far down the cast list to be seen in the shot.

What do you think GH fans, are you excited for a hasty wedding in Sin City for February sweeps? Share your thoughts in the comments below and come back to CDL often for more “General Hospital” spoilers.