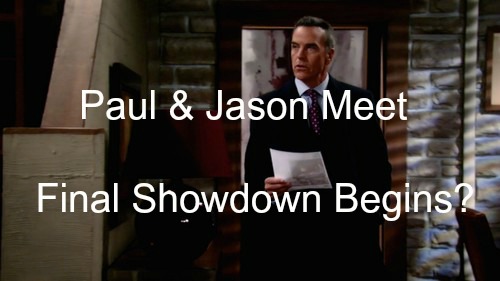 “General Hospital” (GH) spoilers indicate that two dangerous men will be on the hunt for real estate and will cross paths – Paul Hornsby (Richard Burgi) and Jason Morgan (Billy Miller). If this chance meeting goes down as predicted, it could trigger a violent chain of events.

Hot new spoilers from Nathan Varni show Paul apartment hunting and checking out a place GH fans will recognize. It looks like Jason’s penthouse – last occupied by Alexis Davis (Nancy Lee Grahn) and her crew. It’s had a facelift, but it sure looks like the same place.

Trouble is, Jason is also looking for a place to live and may check out his place which Diane Miller (Carolyn Hennesy) may have put on the market for him. This is an interesting meet up because even though Jason’s been arrested lately, he and Paul may have never crossed paths.

Jason is clueless about who Paul is – except he may know he’s the DA – but he knows nothing about Paul’s schemes or involvement with the Jerome mob. Paul, however, knows exactly who Jason is and how much of a stumbling block he’s been to his plans.

If not for Jason, Sonny Corinthos (Maurice Benard) would be dead right now at Paul’s hands. Will Paul take this opportunity to goad Jason? Will Paul talk smack about Sonny being a dirty mobster that he’s going to take down?

Will Paul mock Jason for being Sonny’s hired goon? This might hit Jason hard since he’s concerned about his violent tendencies fresh off an incident with Liz Webber (Rebecca Herbst) and that balcony thing with Nikolas Cassadine (Tyler Christopher).

In fact, Paul might mention Nikolas and let Jason know he’s planning on pressing charges as soon as Nikolas can make a statement. Is Paul’s intent to drive Jason further away from Sonny? Or just send him off the rails?

Jason being back with Sonny would not be a good thing for Paul, but if he prods Jason the wrong way, that’s what could happen. As of now, Jason wants to be nowhere near the mob business – but Jason also has a trigger temper.

If Paul hacks Jason off, he might go to Sonny and warn him about the shady DA which could lead to Jason conspiring with Sonny. It’s like the whole Godfather, Michael Corleone thing – “Just when I thought I was out… they pull me back in…”

If Paul is gunning for Jason either way, might he align with Sonny so they’re a united front? Or will Jason see this encounter with Paul as a sure sign he needs to keep far, far from Sonny? Jason is good at reading people – will something Paul says or does hint at corruption?

Will Jason begin to suspect that Paul’s hands are not as clean as he’d like people to think? Will Paul say something about the night Sonny was shot that he wouldn’t know unless he was there? Anna Devane (Finola Hughes) is closing in on Paul – will Paul’s snarking at Jason put the hitman onto him too?

This is definitely one to watch. Paul thinks he’s the biggest bad in Port Charles – but Jason can give him a run for his money, and then some! Share your comments below and check back with CDL often for more “General Hospital” spoilers, news and updates.