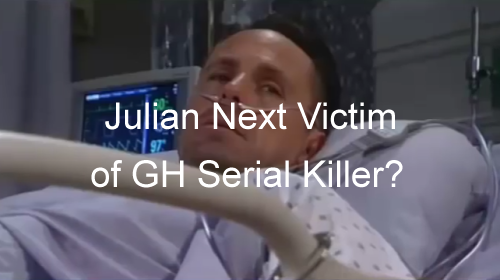 General Hospital (GH) spoilers tease that more kills are coming for the GH serial killer case and with Julian Jerome (William deVry) in the hospital recovering from the stab wound and surgery, we have to wonder if the homicidal mob boss might fall prey to the hospital serial killer.

What do you think? In most cases, the GH killer has acted as an angel of mercy, relieving the suffering of older geriatric patients that, according to Dr Mayes (Matt Riedy), had outlived their prime and were just hanging on and living in pain.

But more recent kills have not been so merciful or so clean cut. Take the case of Bobbie Spencer (Jacklyn Zeman), for instance. She’s not geriatric or past her prime. She just had a dizzy spell and was admitted to GH for observation when the GH killer came for her.

Then when Lucas Jones (Ryan Carnes) recognized the “angel of mercy” he almost died at the hands of the hospital killer. But he survived. Dr Mayes was not so lucky, though. Since Dr Mayes was in the room of a senior citizen patient, it seems like his death may have been bad timing.

The GH serial killer may have intended to kill his patient but then Mayes wandered in and the killer had to take out the grumpy doc instead – and then Liz Webber (Rebecca Herbst) found Mayes. With Julian, though, there’s a question of motive.

General Hospital spoilers question the higher purpose the angel of mercy serial killer serves. If it’s to alleviate suffering of patients, then Julian might not be someone the GH serial killer would consider.

If that’s not their concern, they may pass him by. There’s also the matter of whether Julian could fight off the killer. General Hospital spoilers tease that even though Julian is in a weakened state, he’s still got killer instincts.

Then again, the killer took out Mayes, but Mayes wasn’t on high alert. Julian, however, is always on alert since he’s a killer himself. Plus, Julian well knows there’s a killer lurking the halls of the hospital since his son almost died at the hands of the angel of mercy.

Julian may be watchful for exactly that reason so he may have one of his men lurking around guarding the hallways just in case. There should also be a PCPD guard outside his room to thwart any escape attempt. That should help protect Julian from the GH killer.

However, Julian should also be handcuffed to the bed which means he couldn’t flee or properly defend himself from the angel of mercy. If the GH serial killer made it into the room, there’s no telling what the outcome would be.

And since the killer is likely a medical professional working on the GH staff, they should easily be able to access Julian’s room since doctors, nurses and orderlies are in and out of there all the time. What do you think GH fans?

Will the GH serial killer come for Julian? And if they do, can he fight off the attack? Share your comments below and check back with CDL often for more General Hospital spoilers and news.