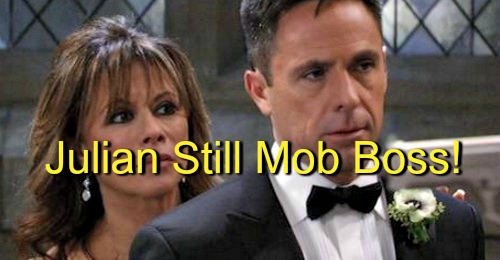 “General Hospital” (GH) spoilers have teased for months that Julian Jerome’s (William deVry) hands are not as clean as he would like Alexis Davis (Nancy Lee Grahn) and the rest of Port Charles to believe. There are several pieces of evidence – some from very recent episodes – that indicate Julian is not out of the mob. Consider this…

Back a couple of months ago, Paul Hornsby (Richard Burgi) had an unusual encounter with Julian at Sam Morgan’s (Kelly Monaco) apartment when it was briefly up for sale. Julian mentioned that he didn’t like that Anna Devane (Finola Hughes) was hassling him about Carlos Rivera (Jeffrey Vincent Parise).

Paul was very reassuring to Julian – but General Hospital spoilers ask why would he be? It makes no sense for a DA to offer assurances to a mobster – even a reformed one. Paul told Julian, “The investigation into your role in Duke Lavery’s murder was closed months ago. My office has moved on.” Julian said, “Glad to hear it.”

Meanwhile, Paul was far from reassuring towards Sonny Corinthos (Maurice Benard). Paul came to hassle Sonny at GH not long after his shooting. Paul told Sonny that he was intent on protecting Port Chuck from mob violence and Sonny told him many DAs had tried and failed to take him down.

Paul made it clear he wasn’t like those other District Attorneys. Agreed. He’s much more dastardly. Clearly Paul was deferring to Julian while focusing on Sonny. But why? It doesn’t make much sense unless Paul has a vested interest in protecting Julian because of mutual mob business.

In an episode just last week, Julian warned Ava Jerome (Maura West) that Dixon (Troy Ruptash) and Raj (Sammy Sheik) had bosses in the gun running enterprise that could come after her. How does Julian know about the current mob bosses that are active in arms deals? Perhaps he’s one of them…

Ava as much as asked the same question but then Julian change the subject abruptly when someone came up to interrupt. It seemed like Julian was trying to warn Ava that the threat to her was real but didn’t want to implicate himself. What is Julian really up to?

Julian got out too easily

Everyone knows you can’t just decide to retire from the mob. The only way out of organized crime is in prison or a body bag and Julian is sitting pretty in his Port Charles Press office with no backlash from his purported exit out of the mob business. That’s not realistic.

GH spoilers think that it’s more likely that Julian just burrowed deeper like a tick into the underbelly of the Jerome mob so that no one would know he’s still masterminding everything. Posing as a legitimate businessman and husband to Port Charles’ top attorney Alexis is a fantastic cover story.

Dixon went easy on Julian at the wedding

When Dixon came to the church looking for Ava, he did threaten Julian but never indicated he was going to shoot Julian or Ava. However, Dixon did shoot Nathan West (Ryan Paevey) and came at Sonny hard but never got that crazy with Julian.

Of note also is that when Julian said he didn’t know anything about the gun shipment, Dixon said, “That surprises him.” Why would it surprise him unless Julian still had underworld clout? And why not just shoot the bride or groom or take them hostage? Hmm…

When will Julian’s secret come out?

Now that Julian is confident that his cover story is locked in tight and he’s married to Alexis, he’ll likely begin to relax – and that’s when things should begin to unravel. General Hospital spoilers tease that Dixon could try and cut a deal that includes revealing Julian? Will Julian come clean to Ava to try and convince her to go straight?

No matter how it comes out, it seems very likely that Julian is still a bad boy mobster, but is on the down-low. Sonny remains convinced that Julian is still mobbed up and he may be right. Share your comments on Julian’s fate and check back with CDL often for more “General Hospital” spoilers and news.