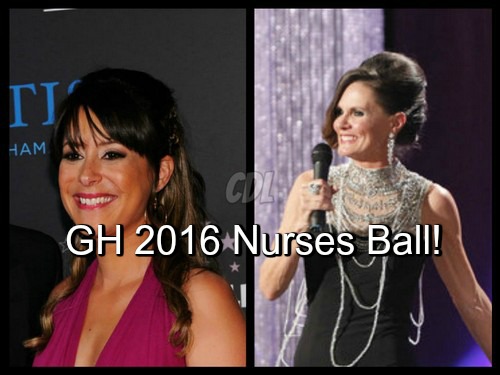 Daytime Confidential reports that Lucy may be involved in a few things that don’t have anything to do with the Nurses Ball. There had been discussion among fans that Lucy may not return to host the 2016 gala.

The speculation about Lucy’s return began after Lynn Herring took to Facebook to reveal she was very unhappy that TPTB used Lucy infrequently and without a strong storyline.

The Nurses’ Ball was founded in 1994 as a fundraiser for HIV and AIDS awareness and research after Robin was diagnosed HIV-positive. The Nurses’ Ball 2001 was the last one until TPTB revived it in 2013 in honor of the “General Hospital” 50th Anniversary

What acts will the residents of Port Charles put on this year? More “Magic Milo”? Will Damian Spinelli [Bradford Anderson] be back to sing? Will Sabrina Santiago [Teresa Castillo] arrive home in time to sing a duet with Nurse Epiphany Johnson [Sonya Eddy]?

Held annually at the Metro Court, the 2016 ‘General Hospital’ will begin on May 24, a bit later than usual. On March 11 ‘General Hospital’ executive producer Frank Valentini confirmed via Twitter that the Nurses Ball would return this year. Aveeno remains as the corporate sponsor.

‘GH’ fans are excited to hear that Lucy Coe and Dr. Robin Scorpio Drake will be back for the 2016 Nurses Ball. We can’t wait to see what the Port Charles residents have in store for us this year. Sadly, we know two favorites will be missing – Dr. Patrick Drake [Jason Thompson] and Duke Lavery [Ian Buchanan].  Come back to CDL for all your General Hospital spoilers and news!