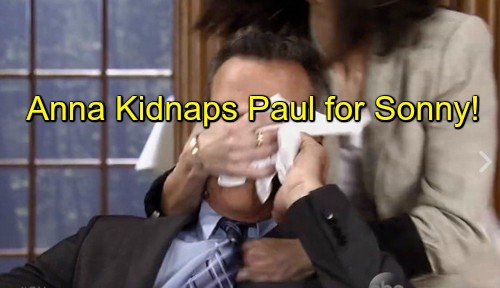 General Hospital spoilers clearly shows Anna creeping up behind Paul and putting a cloth over his mouth. Paul is oblivious to Anna’s approach and she catches him off guard and is able to drug him. Plus, we also know Sonny is bugging Paul’s phones.

Check Out This Shocker as Ava Loses It Over Bloody Threat!

It looks like something Sonny and Anna overhear from the dirt bag DA pushes her to the limit. Anna and Sonny will be stunned to learn that Paul conspired with Carlos Rivera (Jeffrey Vincent Parise) on many crimes and that Paul is a really bad dude – worse than they initially thought.

Anna and Sonny learn that Paul shot Sonny and that Paul’s wild tale about Kyle Sloane (Robb Derringer) abusing his daughter was bunk and he killed Sloane because he was an obstacle. Once Anna and Sonny find out Paul is a criminal, all bets are off.

Paul cannot be trusted and Anna and Sonny need to know what Paul knows so they can get to Carlos. Kidnapping seems drastic, but when you’re dealing with homicidal criminal masquerading as a defender of justice, what else can you do but play dirty?

GH spoilers tease that Sonny can’t get close enough to Paul to incapacitate him – but Anna can – and she can drug Paul so that Sonny’s henchmen can take him away. Will Paul wake up in the coffee warehouse tied to a chair? Likely so – and he deserves what he gets. 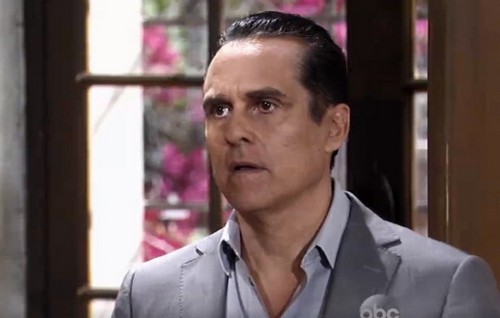 To keep Anna out of this, Sonny will take the lead on getting the answers they need from Paul. And Paul can’t do much about the kidnapping. Sure he could have Sonny arrested – on the strength of his word alone – but Sonny will have too much dirt on Paul by then.

If Paul has Sonny arrested, Paul will go down with him. Plus there’s the fact that Paul shot Sonny and tried to kill him. Most of Sonny’s enemies are six feet in the ground, so kidnapping Paul is nothing to the Corinthos mob boss.

Sonny may have told Anna that Paul wouldn’t be seriously injured so that she would help nab the DA – but it’s very likely Sonny plans on getting the information on Carlos then getting rid of Paul once he knows he can get Carlos and use him to take down Julian Jerome (William deVry).

GH spoilers reveal that this turn of the tables will leave Paul confused. And when Sonny leaves Port Charles to chase down a Carlos lead, Anna will take over with Paul where Sonny left off. Once Anna knows how dirty Paul’s hands are, she’s got no reason to hide behind Sonny.

When Anna takes over questioning (and perhaps torturing Paul), the DA will be impressed – but also a little scared. Paul is the obstacle to Anna getting what she wants – justice for Duke Lavery (Ian Buchanan).

So when Anna finds out he’s been lying to her for months about his involvement with the mob, she’ll be furious. And hell hath no fury like a woman scorned. Let’s hope Emma Drake (Brooklyn Rae Silzer) is out of town before her grandma starts going postal on Paul.

We’ve seen Anna cross lines before – most recently when she helped Sonny tap Paul’s phone – and most grievously when Anna pumped Carlos full of lead. When it comes to Duke, Anna is will to get messy and play hardball and Paul has seriously underestimated her.

Too bad Paul will find out the hard way that was not smart. What do you think GH fans? Are you excited to see Paul tied up and under Sonny and Anna’s control? Will he break and tell them what they want? Or will Paul keep trying to play good cop when we all know that he’s as dirty as it gets?

Share your comments below on Paul’s upcoming kidnapping and how shocked he’ll be when he finds out it was Anna that took him down. And be sure to come back to CDL often for more “General Hospital” spoilers, news and more.