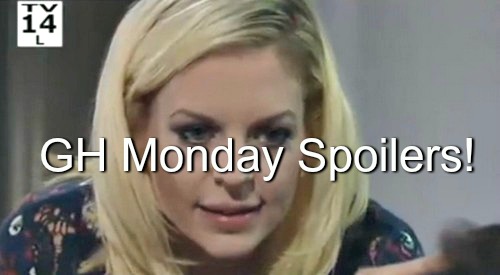 “General Hospital” (GH) spoilers for the Monday February 29 episode show us action at Shriner’s Hospitals for Children and back at GH as well. Kiki’s still ailing, Jake needs surgery, and lots of people are worried about those at risk. Here’s what to expect.

Over at GH spoilers we learn that Kiki Jerome (Hayley Erin) is hanging in there, but everyone is worried. Anna Devane (Finola Hughes) checked on her and it seemed Griffin Munro (Matt Cohen) was checking Anna out. What’s that about? More on that soon…

Now, Anna sits with Andre Maddox (Anthony Montgomery) lamenting the bad choices she’s made. He tries to remind her that she’s a hero but Anna thinks she’s headed for Pentonville. Can Andre lift her spirits by showing her a story about her past good work?

Meanwhile Griffin stares intently at his phone – will we see what he’s looking at and whether it reveals who he’s linked to in Port Charles? Julian Jerome (William deVry) will head to General Hospital to be with Ava, but first he hangs with Alexis Davis (Nancy Lee Grahn) and Sam Morgan (Kelly Monaco).

The parents want to know if Sam filled Jason Morgan (Billy Miller) in on the violent events at their wedding. She hasn’t yet – looks like Sam is missing Jason and wants to go see him soon. When will that happen?

Jason and Liz Webber (Rebecca Herbst) sit fretting while Jake Spencer (James Nigbor) has surgery for his broken bones. How will he come out of it? Is it a good prognosis? Looks like Jason and Liz should expect more visitors soon to support them and Jake.

As they wait, Liz also considers whether living at Wyndemere is such a good idea given her history with Nikolas Cassadine (Tyler Christopher) and her dislike of his new bride Hayden Barnes (Rebecca Budig). What will Liz decide?

Hayden hangs out with Tracy Quartermaine (Jane Elliot) who is starting to look like she’s at death’s door. She has a lot of question for Hayden that has Hayden wondering what is going on with Tracy. Hayden asks why these subjects interest her all of a sudden. Any chance we find out more on Rachel?

Also General Hospital spoilers say that once Maxie Jones (Kirsten Storms) can wake up Nathan West (Ryan Paevey), she wants to know who Claudette is and why Nathan still loves her. How can Nathan explain this away especially since he just turned down Maxie’s marriage proposal?

Claudette sounds French – does this tie in to wherever Nathan was when he learned French? Does he have a French lover he’s never gotten over? Look for Nathan to tell Maxie a big lie but feel guilty about it later.

Lots happening on the Monday February 29 episode of GH. Watch then come back to CDL for more “General Hospital” spoilers and news.