General Hospital (GH) Spoilers: Mystery Guest at Helena’s Will Reading Revealed – A Blast From The Past 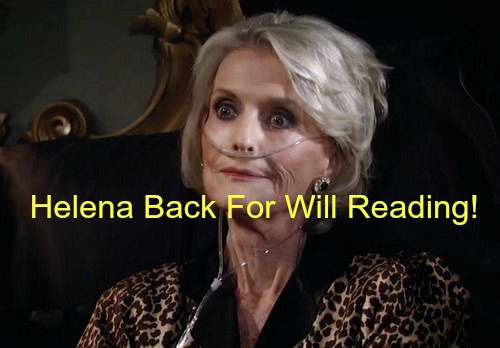 “General Hospital” (GH) spoilers reveal over upcoming episodes next week that the reading of Helena Cassadine’s (Constance Towers) last will and testament will involve a mystery guest – but now it looks like it’s Helena herself who will be at the reading of the will!

Many GH spoilers fans suspect that Helena is not as dead as Nikolas Cassadine (Tyler Christopher) would have us believe – maybe she’s dead, maybe she’s not… But General Hospital spoilers tease that Towers is back to reprise her role as Helena. But how?

Spoilers hint that Helena’s will reading is actually a video. That means the paper version of the will that Nikolas has in his safe and Hayden Barnes (Rebecca Budig) tries to peek at is likely invalid since the video is more recent and would replace the older one the Prince has.

But in addition to the appearance of Helena from beyond the grave on DVD, could there be another mystery guest at the reading? Nikolas sure made a big deal out of mentioning that it was the oldest Cassadine male that inherits all the goods.

But is there an older Cassadine that Nik doesn’t know about that lives on? Is it Valentin? Or another? Could it be Michael Easton’s new character? It seems like there was a big deal made out of the mention of the “oldest” male so it’s likely that will come into play.

If not the oldest male, could Helena have changed it to oldest female? Wouldn’t that put Alexis Davis (Nancy Lee Grahn) in charge of the family? The bottom line is, whatever comes out of that will reading, it won’t be good news for Nikolas.

There’s also a question of why Laura Spencer (Genie Francis) and Lulu Spencer (Emme Rylan) are invited. Both GH legacy characters have Stavros Cassadine (Robert Kelker-Kelly) in common, so maybe he’s the clue as to why they made the list…

We also know that Laura will head out on an adventure that’s triggered by the will reading. Will Laura go in search of a missing Cassadine? Is this about Lulu’s embryo? A new Cassadine? An old Cassadine? What mischief has Helena put into play?

Is Helena pulling her last evil scheme from the great beyond? What do you think GH fans? What does Helena have in store at the video will presentation? Will Nikolas find himself broke and at the mercy of another Cassadine?