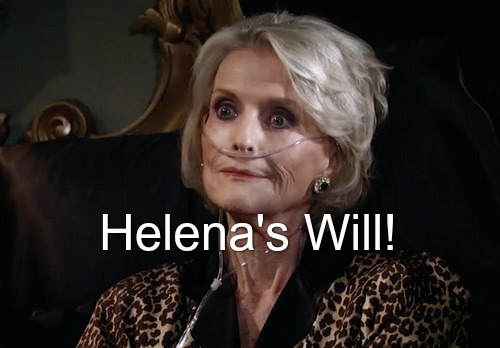 “General Hospital” (GH) spoilers reveal that Helena Cassadine’s (Constance Towers) will is to be read in coming days and it promises to contain surprises and shocks to her heirs. Is this Helena’s last scheme? Her last chance to torment those she loved and hated?

One person we know for certain is a recipient of something from Helena’s treasure trove of horrors is Laura Spencer (Genie Francis). Laura will be stunned when she hears from Scotty Baldwin (Kin Shriner) that she has to be present for the reading since she’s an heir.

Of course, Laura is the mother of Helena’s beloved Nikolas Cassadine (Tyler Christopher), but Laura herself has never been a favorite of Helena. GH spoilers indicate that Laura will set off an adventure soon and it may be as a result of what comes out of the will reading.

But we have to wonder – is Helena sending Laura off on a wild goose chase? Or into danger – as one last awful plot unfolds? Will Luke Spencer (Anthony Geary) make a cameo for the reading of the will?

Helena adored Luke as much as she wanted to kill him, so it’s a possibility that she left him something.
And although Nikolas seems to control the family fortune (even though it’s dwindled), could Helena somehow cheat him in the will and skip over him to vest the family title in young Spencer Cassadine (Nicolas Bechtel)?

Since Helena only has two living relatives (that we know of) it seems like her enemies are the only likely other recipients of her largesse. But could the reading of Helena’s will reveal a previously unknown Cassadine? GH history indicates there’s a Cassadine girl yet to be revealed.

Helena believes this young woman to be dead because decades ago, Helena had Liesl Obrecht (Kathleen Gati) dispose of the child. Liesl was ordered to have the child killed, but is far more likely to have placed the child in an orphanage instead. It could have been the child of Mikkos, Stefan or Stavros.

With Helena dead, this woman may feel safe to come out of hiding and reveal herself as a Cassadine – and show up to the reading of the will to claim her share of the family goodies. GH spoilers for a while indicated Rosalie Martinez (Linda Elena Tovar) might be the missing Cassadine girl.

However, it could be absolutely anyone – someone we know like Darby Collette (Jesica Ahlberg) or Rosalie – or someone we’ve yet to meet. So long as it’s not Hayden Barnes (Rebecca Budig), it’s good, since that would make the Hayden-Nikolas relationship pretty icky.

What do you think GH fans? Will the mystery Cassadine finally show herself at Helena’s will reading? And will Helena give out treats as part of her last will and testament? Or will it be all tricks as she plays out one last scheme from the grave?

Share your comments below and check back with CDL for daily “General Hospital” spoiler and news.