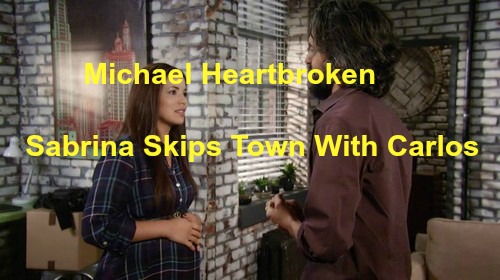 “General Hospital” (GH) spoilers tease that we will see Sabrina Santiago (Teresa Castillo) do the unthinkable in coming days. Sabrina has always taken a hard line against Carlos Rivera’s (Jeffrey Vincent Parise) mob activities, so what she does next will be a shocker.

Sabrina faces three major conflicts in coming days that will drive her to do something that seems out of character for her. Anna Devane (Finola Hughes) will come sniffing around asking questions about Carlos that upset Sabrina. As far as Sabrina is supposed to know, Carlos is dead.

Can Sabrina convince Anna she still believes Carlos has met his maker? Anna will put a scare into Sabrina who doesn’t want her baby daddy to go to jail, even though he’s the worst sort of criminal. Carlos is the second conflict the very-pregnant Sabrina has to deal with.

Carlos comes knocking and, if he doesn’t already know that Anna is on the hunt for him, Sabrina will warn him. Carlos will make a very impassioned plea for Sabrina to leave town with him. He tried that once at the Nutcracker Gala, but Sabrina was still with Michael Quartermaine (Chad Duell) then so she refused.

Will Carlos be able to convince her they can have a new life, happy as a little family, far from Port Charles? Carlos will try every trick in his book to sway Sabrina to go on the run with him but she’s always been hesitant before. But now things have changed…

The third conflict is how Sabrina feels for Michael. She really loves him and wants him to be the father to her child, but Michael made it clear that her lies ended any chance they had. But what Sabrina doesn’t know is that Michael will have a change of heart soon.

In coming days, Michael will have a talk with Dante Falconeri (Dominic Zamprogna) and Sonny Corinthos (Maurice Benard) about the state of his broken relationship with Sabrina and their perspectives will trigger him to rethink him calling things off with her.

We’ll see Michael show up to Sabrina’s to patch things up, but it looks like it’s too late. Has Sabrina done the unthinkable? Yep. Sabrina will actually give in and take off with Carlos. Why will the usually good-girl nurse run off with the fugitive?

She thinks that she and Michael are done so she may as well be with her disreputable baby daddy. Sabrina will leave a letter for Michael that expresses her intense regret for the lies and reconfirms her love for him and wish that he has a happy life.

Will Michael try and find Sabrina to save her from her mistake? We know Anna will definitely be after them once she realizes Sabrina has rabbited and could lead her right to Carlos. How will this play out? Will Sabrina be hurt in the chase? Will Sabrina and Carlos make it out of Port Charles?

Sabrina’s portrayer Teresa Castillo is taking a number of weeks off for maternity leave, so this gambit will likely result in her being off screen for a while – the question is, where will Sabrina go? Are she and her baby safe? Will Carlos finally be caught and held accountable for his crimes?

Stay tuned to ABC’s GH for more on this storyline as it unfolds in coming days – and check back with CDL often for tons more “General Hospital” spoilers and news.