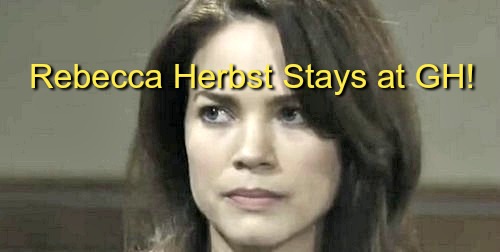 ‘General Hospital’ (GH) spoilers have confirmed that Rebecca Herbst is NOT leaving the ABC soap opera, on Friday March 11 it was officially announced that Herbst and ABC had come to an agreement, and she would be sticking around Port Charles for a few more years.

Rebecca Herbst confirmed the news to TV Insider, and she had a lot to say now that negotiations were over and she could speak freely about the issues.

But, Rebecca wouldn’t speak freely about everything. When TV Insider asked Rebecca if her contract negotiations were stalled over her amount of screen time or pay – the actress couldn’t comment. Apparently, once you sign a contract you are basically agreeing not to talk about anything in the contract.

‘General Hospital’ spoilers teased for months that Rebecca Herbst was quitting the ABC soap because she was not happy with Liz Webber’s storylines, or the hole that the writers had dug for her character. But, according Rebecca – that couldn’t be farther from the truth.

Rebecca dished “I go in and do what’s on the page and then I go home. I don’t believe it’s my place to dictate storyline. People were saying that I was upset about the Jake/Jason story when, in fact, I embraced it. It ended up being a lot of fun.”

Herbst also confirmed that the ‘General Hospital’ rumors were true – and ‘DOOL’ was trying to steal the talented actress since ABC couldn’t seal the deal. And, even more shocking, according to Herbst, there was actually more than one daytime drama that was trying to get their paws on her.

Jill Farren Phelps probably jumped at the idea of bringing Rebecca to Genoa City with her former Jason Morgan love interest Steve Burton. How fun would that have been, to have Steve and Becca back together again? Especially since the Billy Miller version of Jason Morgan was not a huge fan of Liz’s!

So GH fans, are you excited that you can finally breathe a sigh of relief and sleep like a baby tonight, knowing that Liz Webber is not leaving Port Charles? Or were you kind of hoping to see her head to Days Of Our Lives? Come back to CDL for all your General Hospital spoilers and news!