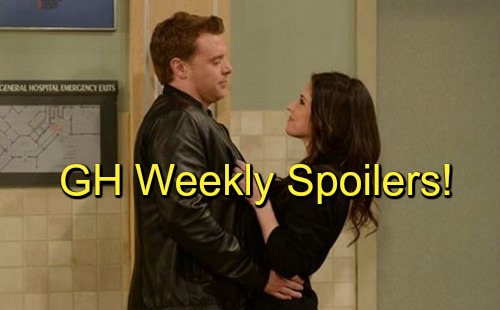 “General Hospital” (GH) spoilers reveal that the episodes for next week, the week of Monday March 14 through Friday March 18 will bring a stunner to Anna, surprises at the Helena Cassadine will reading, and ugly shocks at Crimson, plus a mess at the courthouse as the breastfeeding trial kicks off.

Dante Falconeri (Dominic Zamprogna) talks to Nathan West (Ryan Paevey) about Claudette and General Hospital spoilers warn that the truth comes out about the woman that Nathan can’t seem to move past. Anna Devane (Finola Hughes) talks to Andre Maddox (Anthony Montgomery) about her stalker.

Jordan Ashford (Vinessa Antoine) sees them together and thinks they look too cozy. Anna will have to calm Jordan down as she gets a little green eyed. But is Jordan off the mark? Is there a bit of a spark between Jordan and Anna? Later, Anna Googles Griffin Munro (Matt Cohen).

GH spoilers promise that Helena Cassadine’s (Constance Towers) will reading takes place and Helena gets the last word, of course. She has parting gifts and remarks that leave many of the beneficiaries perplexed and wondering.

Anna finds out that Griffin is Duke Lavery’s (Ian Buchanan) son and will be stunned. This is great for Anna who really needs someone in her life so she’s less alone. Dante sees Valerie Spencer (Brytni Sarpi) with Curtis Ashford (Donnell Turner) and decides to give her advice.

Valerie doesn’t want to hear anything from Dante about her relationships. Dante also tells Valerie that he and Lulu Spencer (Emme Rylan) are working things out. Dante and Lulu will also have a talk about what’s next for their marriage.

Julian Jerome (William deVry) is determined to tank the next issue of Crimson. He’s got two reasons to do so. First, he wants the tax write off. Second, Julian doesn’t want the magazine going out with the cover of Olivia Falconeri (Lisa LoCicero) nursing their son Leo.

General Hospital spoilers predict that Julian schemes to sabotage the Real Women issue and Alexis Davis (Nancy Lee Grahn) won’t be happy when she finds out since she was relying on the Olivia article as part of her lawsuit against the city on behalf of Olivia and her mother’s rights.

Nina thinks Franco is being a hypocrite by playing dad to little Jake Spencer (James Nigbor) and Kiki Jerome (Hayley Erin) while still refusing to start a family with her. How will Franco respond to her accusations? Franco defends his friendship with Liz.

Franco fails a test set for him by Liesl Obrecht (Kathleen Gati) and they talk about his stance on an important issue. Is Liesl bugging Franco about his resistance to having a kid? Likely Liesl would love for her Franco to have a little liebchen…

Ava gets a message that scares her – it’s a startling “gift” of sorts likely that has to do with the gun running mess she was just embroiled in thanks to Paul Hornsby (Richard Burgi). Sonny will help out Ava and Kiki later in the week, but he’s got a selfish motive for doing so.

Sam Morgan (Kelly Monaco) will make a decision that affects her relationship with Jason Morgan (Billy Miller). Sam wants to slow things down, but aren’t they pretty slow already? Will Jason accept this or push back on his wife?

Sonny and Alexis figure out something is up with Kristina Corinthos (Lexi Ainsworth). Professor Parker (Ashley Jones) is back in Port Charles soon – is romance heating up for her and Kristina? Sonny and Alexis will find out Kristina offered a professor sex for a grade, but not the whole truth yet.

Sonny at first assumes that the teacher she propositioned was male. Kristina is nervous about all this and Alexis tells her she has her support no matter what. Kristina talks to Molly Lansing (Haley Pullos) about her problems, but still holds back some issues.

Sonny also has to cope with Morgan Corinthos (Bryan Craig) who is in despair and suicidal. Sonny tries to help but it’s not enough. Epiphany Johnson (Sonya Eddy) has a warning for Liz. Is it about Franco? Jake? Something personal or GH-related?

Mayor Lomax (Shari Belafonte) is back as the nursing lawsuit kicks off and tries to strong arm Alexis and Olivia into dropping the case, but Carly Corinthos (Laura Wright) gets aggressively involved and turns things around.

Julian’s sabotage plot against Crimson will backfire on him in big way as Nina and Maxie are close to figuring out he’s the one who has been working against them all along. Did Julian cause the green issue debacle? What will Alexis do when she finds out?

All this and more the week of Monday March 14 thru Friday March 18. Watch every day then come to CDL for daily “General Hospital” spoilers plus news and more.