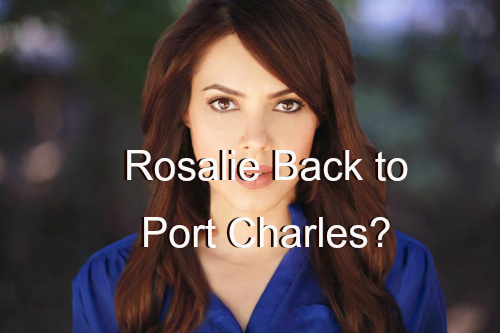 General Hospital’ (GH) spoilers tease that Rosalie Martinez (Linda Elena Tovar) might be headed back to Port Charles. Many GH fans want her back or at least want to know what her secret is since it wasn’t her marriage to Brad Cooper (Parry Shen).

Late yesterday, Linda Tovar tweeted a pic of her with Chad Duell (aka Michael Quartermaine) with the caption “Look who I ran into today.” The photo is tagged as Santa Monica, California which isn’t too far from ABC Prospect Studios.

Were Linda and Chad hanging out backstage at the General Hospital set? The pic that Linda tweeted doesn’t look like a restaurant, coffee shop or other hang out. It looks like a plainer space – perhaps it’s a GH dressing room or office at the studio.

Plus, Helena Cassadine (Constance Towers) was using Rosalie. That all tied back to the secret that we didn’t know. Plus, now that Rosalie’s ex Brad just got hitched to Lucas Jones (Ryan Carnes), it’s great timing for a return.

And since Michael is back with Sabrina Santiago (Teresa Castillo), Rosalie’s return would complicate that as well. General Hospital spoilers tease someone from the past will mess up Sabrina and Michael’s reconciliation – could that be Rosalie? 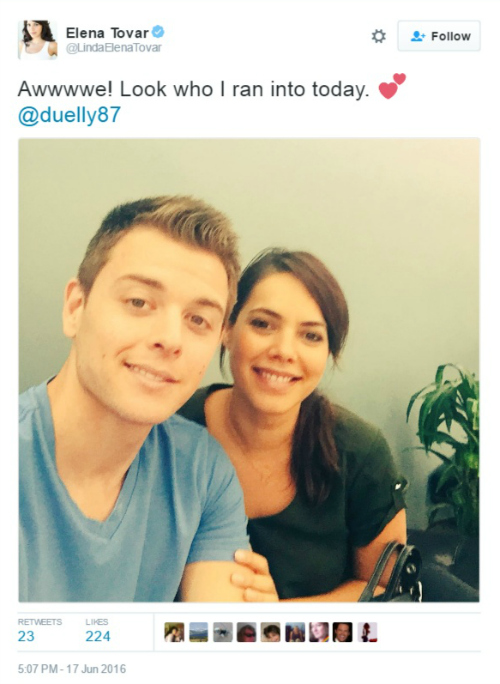 There are so many plots that are in high gear right now that the GH writers could drop Rosalie into, if only for a little while. Rosalie could show up on Cassadine Island as part of that big storyline. Rosalie could drop in on her newlywed ex Brad.

Rosalie could drop by the Quartermaine mansion to remind Michael about their night of passion and make that an issue between him and Sabrina. Rosalie could also get back with Nina Clay (Michelle Stafford) to make trouble.

There are tons of opportunities to use Rosalie in any of the existing summer storyline – even if it’s only for a short arc. If Linda Tovar’s pic is from her first day on set, we wouldn’t see her until late summer anyway, but it could happen!

If Rosalie is back, no matter who they put her with, it would be fun to see her return to Port Charles and stir up some more drama. Alternately, is there a chance that Linda Tovar and Chad Duell are dating and that’s why she tweeted?

What do you think GH fans? Do you hope that Linda Elena Tovar is returning as Rosalie Martinez? If so, what trouble would you like her to stir up? Do you want to finally learn the secret that allowed Rosalie to be blackmailed repeatedly?

Do you want to see Rosalie back for a short arc – or back on the character canvas for good? Share your comments below on the possible return of Rosalie and check back with CDL often for more General Hospital spoilers and news.