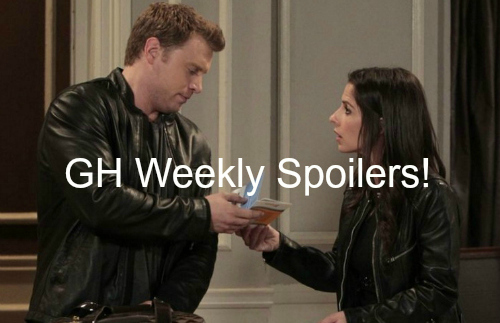 General Hospital (GH) spoilers for episodes the week of Monday, June 20, to Friday, June 24, reveal that Julexis splinters, Nina makes a bold move, Franco and Liz heat up, and Finn finds romance where it’s least likely when someone comes to his rescue.

Alexis Davis (Nancy Grahn) is arrested and while a shocked Sonny Corinthos (Maurice Benard) watches his baby mama hauled away by Nathan West (Ryan Paevey). Anna Devane (Finola Hughes) tries to get Alexis to flip on her hubby once she’s at the PCPD.

Julian Jerome (William deVry) feels like he’s safe now that he promised to strip down for Crimson to seal the alibi deal with Nina Clay (Michelle Stafford). Olivia Falconeri (Lisa LoCicero) confronts Julian about Alexis and Nina at the Crimson offices.

Sonny goes after Julian and confronts him about letting Alexis go to jail for his crime. Julian visits Alexis at the PCPD with a scheme to get both of them in the clear for the Carlos killing. Alexis refutes him and turns to Diane Miller (Carolyn Hennesy) instead.

Paul Hornsby (Richard Burgi) tells Mayor Lomax (Shari Belafonte) that he’ll take care of things so they’ll work out to her benefit. Anna, Jordan and Sonny try and figure out how to use Alexis to take down Julian, but it might not work out like they want. 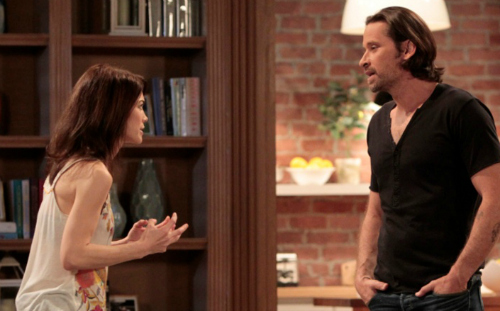 Nina also wants Franco (Roger Howarth) to undress for the camera but that’s not enough for her. Nina fantasizes about Franco later in the week and propositions him to sleep with her. Franco confesses all this to Liz Webber (Rebecca Herbst).

Franco visits Liz as she’s moving into her new house. After Franco confides his confusion, they kiss one another and both seem surprised at how their friendship has migrated to something new. Franco then ignores texts from Nina as he focuses on Liz.

Hamilton Finn (Michael Easton) is in bad shape and his health deteriorates but Hayden Barnes (Rebecca Budig) steps up for him. Finn doesn’t want her help, but she won’t leave him and this is the foundation for a friendship that will turn into more.

Finn heads to the Quartermaine mansion on a house call according to General Hospital spoilers and he gets face time with Tracy Quartermaine (Jane Elliot) who wants to end his GH suspension. Will Hayden and Tracy bond over their mutual admiration of Finn? 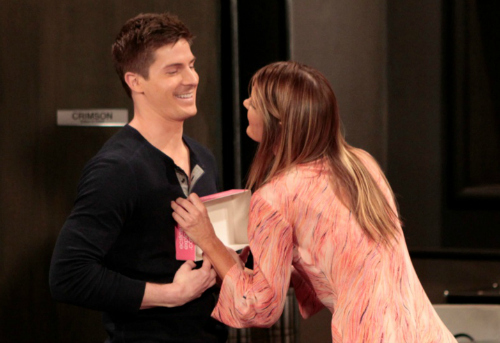 Morgan Corinthos (Bryan Craig) finds a way to interfere with Dillon Quartermaine (Robert P Watkins) and Kiki Jerome’s (Hayley Erin) first date. Morgan has something to tell Kiki – will he reveal that Ava Jerome (Maura West) broke them up?

A shocking package arrives at the Crimson offices this week – it’s pink and General Hospital spoilers in new photos show it’s from ecstasyexplosions.com (not a real site) but it’s naughty stuff in a pink box. The staff of Crimson is shocked.

Fingers crossed the date will turn out to be Paul, but we’ll see. Also, the action rolls on in London with Huxley Lynch (Trent Dawson) and we’ll meet Margarethe (Diane Delano), his assistant. Nick Stabile will continue in his recast as Nikolas Cassadine for now.

Sam Morgan (Kelly Monaco) and Jason Morgan (Billy Miller) find evidence of the woman with Nikolas and will be surprised to discover its Ava Jerome (Maura West). Huxley is at the same hotel – perhaps looking for the statue that Ava has in her possession.

Lots to see on GH episodes the week of Monday, June 20 thru Friday, June 24. Share your comments on all these GH spoilers. Be sure to come back to CDL often for more General Hospital spoilers and news.