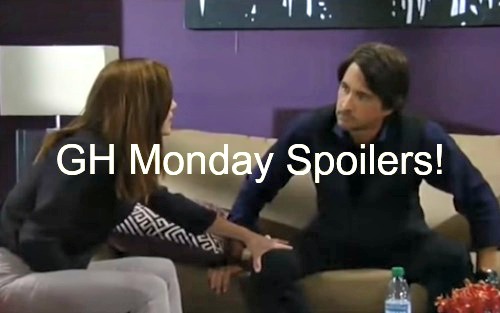 General Hospital (GH) spoilers for the Monday, June 20 episode reveal that Hayden steps up for Finn in a big way, Alexis is hauled off to jail, Nina tries to get Franco naked, and Maxie tries to get Griffin dressed. Here’s what to expect on the next General Hospital.

There are sparks flying between Hayden Barnes (Rebecca Budig) and Hamilton Finn (Michael Easton) although the lizard-loving doctor will try and deny it. Hayden got Finn back to his MetroCourt room and it looks like he passed out.

When he comes to, Hayden is still there and ready to help. Finn just wants her to go but she won’t. Not only do they have chemistry, but Hayden loves his lizard and that’s a big deal. Finn will try and fight it, but those two are fated for romance.

General Hospital spoilers reveal that Finn may open up to Hayden and share some of his secrets. Nina Clay (Michelle Stafford) and Julian Jerome (William deVry) seal the deal to keep his alibi in place but it will cost him his dignity. 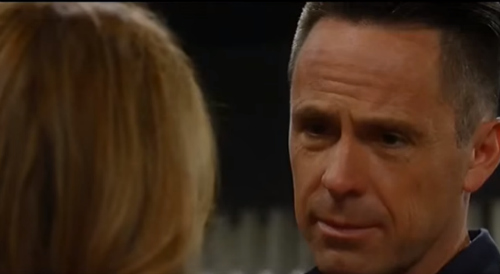 Olivia Falconeri (Lisa LoCicero) senses something going on between them but, more importantly, has questions for Julian about Alexis Davis (Nancy Grahn). Did Olivia hear about the arrest before Julian? Olivia asks what’s up with his wife.

Sonny Corinthos (Maurice Benard) and Alexis are both stunned as Nathan West (Ryan Paevey) slaps cuffs on the lady lawyer. Sonny tries to block the arrest, but it’s happening since the forensic tests point to Alexis as the culprit.

Anna Devane (Finola Hughes), Paul Hornsby (Richard Burgi), and Jordan Ashford (Vinessa Antoine) await Nathan’s return to the station with Alexis in handcuffs. They wonder what Alexis will have to say and Anna will interrogate her.

Although Jordan kicked Anna off the case, Paul went over her head and rversed it, so Anna will get to talk to Alexis first. Anna tries playing the empathy card since she was also involved with a mobster but Alexis is on high alert. 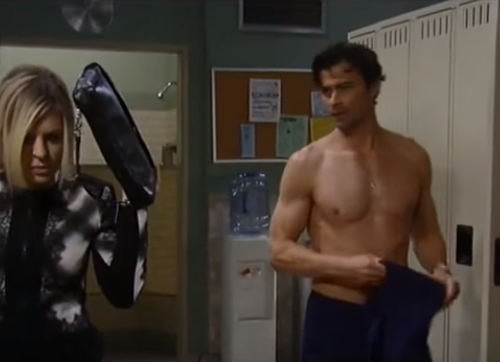 Griffin Munro (Matt Cohen) must be the cleanest guy at GH because he always seems to be dripping wet fresh out of the shower – not that we’re complaining. Maxie Jones (Kirsten Storms) comes to see him and remarks that he’s always undressed.

She does know she’s in a locker room, right? Maxie wants to talk to Griffin, but if it’s more about the Nathan drama, Griffin might snap. He’s still keeping the secret that he’s the one that Nathan shot and this is getting stressful for him.

The last time Franco (Roger Howarth) was at the Crimson offices, he was naked and tried to seduce Nina Clay (Michelle Stafford). General Hospital spoilers reveal that Nina will turn the tables on Franco and is the one who asks him to undress.

Nina wants to put Franco in the “Real Men” issue of Crimson but will he agree to shed his clothes and let them snap photos of him? Looks like Nina is on the prowl and her hormones are getting the better of her. Will Franco be tempted?

What do you think GH fans? Share your comments below on these GH spoilers for the Monday, June 20 episode and check back with CDL often for more General Hospital spoilers and news.