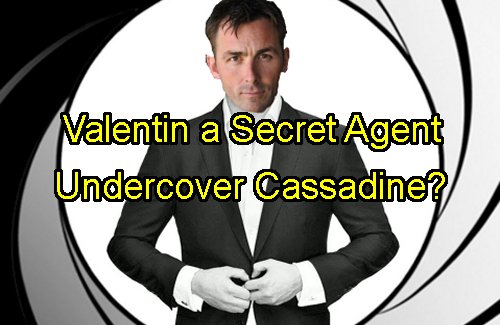 New General Hospital (GH) spoilers tease that there could be a very reasonable explanation about why Valentin Cassadine’s (James Stuart) past is so cryptic and why he knew the motto of the WSB training camp. Is he really an undercover spy and not a bad guy at all?

We know from Valentin’s talk with Nina Clay (Michelle Stafford) yesterday that he went to boarding school in England and never came back home. From there, he seemed to fall off the radar and only showed up a year ago. Could there be a “James Bond” type plot in play?

Valentin might have been recruited out of boarding school because of his sharp mind and Cassadine name and he’s been working undercover under a variety of assumed names, up until five years ago. Five years ago, the WSB may have assigned him to come out of hiding and play himself.

All the dirty things Anna thinks he’s done – like being a mercenary – might have been under an assignment from the WSB and he’s really not a bad guy at all. But then there’s the Nikolas Cassadine (Tyler Christopher) shooting. Perhaps that is not what it seems either. 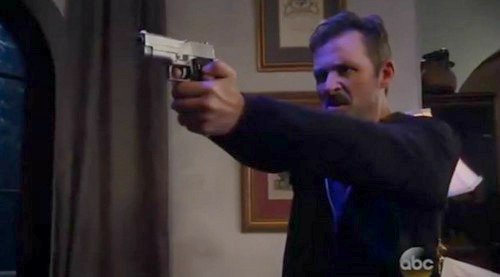 Valentin might have staged that shooting with Nikolas’ cooperation to get Nikolas into protection because of threats to him and Spencer Cassadine (Nicolas Bechtel) related to Valentin’s undercover work. Nikolas could be in hiding now and perfectly safe and in contact with Spencer.

Then when Valentin tried to “kidnap” Spencer, he might have been planning to take the boy to his father Nikolas but Sonny Corinthos (Maurice Benard) stopped him. That ended with Spencer in boarding school, but Nikolas could have contacted his son there so they’re both safe.

Then there’s also Kevin Collins’ (Jon Lindström) shooting to consider but Valentin was firing a warning shot to get things under control but Kevin leaped in front of the bullet that would have hit no one. Valentin was trying to act tough, but not kill anyone.

Valentin seems to be goading Anna, but perhaps he’s trying to hint to her that they’re on the same side by slipping her that Latin phrase. Maybe he’s hoping Anna will figure out he’s undercover and stop pushing his buttons and talking to the cops about him. 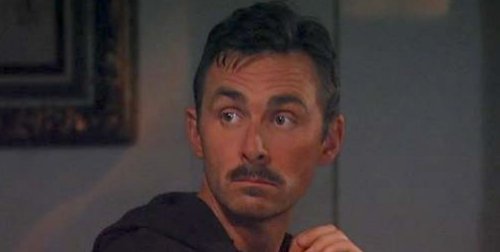 Anna has spoken to Robert Scorpio (Tristan Rogers) about the Greek and he didn’t know anything about this but if Valentin has been undercover at the WSB for 20 years or so, since boarding school graduation, the operation would pre-date Robert so he might not know.

This might all tie back to Victor Cassadine’s infiltration of the WSB and that’s why Valentin came out as a Cassadine. Since Valentin is a pretty interesting character to keep around, it would be great if it turns out he’s a good guy doing bad things for the right reasons.

Valentin could very well be an undercover WSB counter-intelligence spy. That could explain why he was in a mustache and calling himself Theo Hart when he first came on the scene – that might have been one of his spy aliases.

What do you think GH fans? Do you like Valentin and hope that the twist is that he’s not a bad guy but a secret hero? Share your comments below and check back with CDL often for the latest General Hospital spoilers and news.