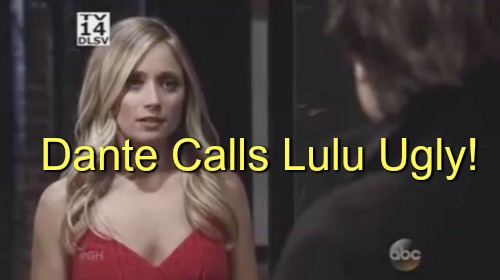 “General Hospital” (GH) spoilers indicate that a desperate Lulu Spencer (Emme Rylan) decides sex is the best way to win back Dante Falconeri (Dominic Zamprogna) and sets up a seduction scene at Dante’s loft. Lulu will be stunned and humiliated by Dante’s angry rejection.

Dante still assumes Lulu was shagging Johnny Zacchara (Brandon Barash) so when he sees her there in lingerie, that’s what he will think of – not his sexy wife. Dante hates Johnny and believes that Lulu was sexing up the gangster while plotting Valerie Spencer’s (Brytni Sarpi) demise.

Dante won’t just reject the sex offer, but will lash out at Lulu and make her feel horrible. Lulu will be standing there in her sexy red negligee, hoping for an intimate night with her husband but will instead be kicked to the curb and ashamed at how Dante treated her like dirt.

This puts Lulu in a vulnerable position perfect for Dillon Quartermaine (Robert Palmer Watkins). GH spoilers indicate that Dillon is going to be a rock for Lulu during this painful period as she finally comes to accept the hard truth that her marriage is over and Dante is disgusted with her.

Lulu came close to bedding Dillon a couple of months ago when she first moved out of her loft, but stopped herself because she wanted to try and make things work with Dante. But now that she knows her marriage is over and is feeling unattractive and sad, she needs comforting.

Dillon may get his rebound shot with Lulu, but is she open to love or just sex? Dillon really cares about Lulu but it looks like she might use him to bolster her self-esteem and indulge in some passion to forget how bad she’s hurting – but then she could hurt Dillon in return.

And Lulu turning to Dillon will further cement for Dante that he made the right call by going for a divorce. Dante and Lulu are caught up in a vicious cycle of miscommunication and unfortunate circumstances complicated by others interfering in their marriage – Dillon and Valerie.

This will be further mired when Dante sees Curtis (Donnell Turner) flirting with Valerie. She just told Dante that he needs to stay away from her and he accepted that, but now that he sees another guy sniffing around, Dante may make a play to get her back.

Dante just cannot be without a woman – of course we all know why since his mom Olivia Falconeri (Lisa LoCicero) just told a reporter she breast fed him until he was five. That explains a lot… The bottom line is that Lulu has lost all appeal for him and Valerie is more enticing now that she kicked him to the curb.

GH spoilers reveal we may see Valerie and Dante recoupling soon and Lulu using poor Dillon to warm her bed while denying him any affection. Lulu is in a mess – we have to wonder if depression over her divorce could send her into a mental spiral – we’ve seen it before…

For more on Dante and Lulu’s marriage mess, don’t miss a moment of GH and be sure to come back to CDL often for more “General Hospital” spoilers and news.