General Hospital (GH) Spoilers: Dillon Makes a Play for Lulu as Marriage to Dante Crumbles – What Does She Do? 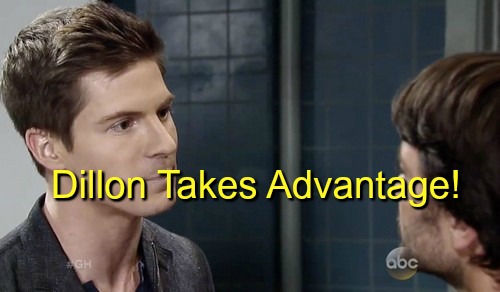 Although Dillon didn’t start the mess between Lulu and Dante, he’s been along for the ride and making things worse. It was Dillon with Lulu in Canada chasing her parents and brother. And that led Dante to assume Lulu and Dillon were shagging.

That led Dante to shag Valerie Spencer (Brytni Sarpi) and then all the ensuing mess. Dillon desperately wants to make up to Lulu for running the video clip of Valerie confessing the affair. However, he’s been playing it cool and not coming around as much as usual.

However, now that Lulu put Valerie’s life at risk by scheming with Johnny Zacchara (Brandon Barash), Lulu will need all the support she can get. Dante just told Lulu he was going to pursue a divorce and she broke down wailing.

But Lulu is determined that won’t happen – she’s got that Spencer stubbornness. Lulu will soon consult Dante’s mom Olivia Falconeri (Lisa LoCicero) and BFF Maxie Jones (Kirsten Storms) on how she can patch things up with Dante.

Meanwhile, we’ll see Dillon step up in a big way to help Lulu deal with this emotional crisis. Dillon knew there was a chance that Dante and Lulu could reconcile – particularly after Dante’s jealous post-New Year’s tirade aimed at Dillon but that was before the Johnny mess.

But once Dillon hears that Dante is making their split permanent, he’ll be sniffing around Lulu to help her pick up the pieces. Of course, Dillon will come in the guise of friendship to support her in her time of need. But what’s more likely is that he’s hoping to be first in line for a rebound romance.

Dillon has made it clear that he cares about Lulu, wants to be with her, and doesn’t think Dante deserves her. When Lulu tries to find a way to crawl back to Dante, Dillon will encourage her to stand up for herself and move on.

He can remind Lulu how poorly Dante has treated her and that she’s not the one to blame – and not the one who should be begging forgiveness. Dillon is pals with Valerie and won’t like that Val was almost killed, but he will lay all that blame on Johnny, not Lulu.

What can help Dillon is that he’s forming close ties with Maxie by working with her at Crimson. Since he’s got an ally in Lulu’s BFF, he may be able to get Maxie to talk him up to Lulu. Maxie doesn’t want Lulu’s marriage to be wrecked, but she may see that they could be better off apart.

The problem with Dillon hanging out and making his move – even if Lulu rebuffs him – is that his very presence could make Dante reject any reconciliation efforts that Lulu makes. What do you think GH fans? Will Lulu rebound with Dillon? Is her marriage to Dante dead (at least for now)?

Don’t miss a moment of the GH action this week and come back to CDL every day for “General Hospital” spoilers, news and more.