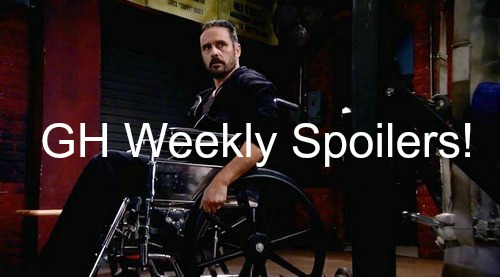 “General Hospital” (GH) spoilers for the week of Monday, January 25 through Friday, January 29 reveal the return of old character, introduction of a new troublemaker, mob action and a manhunt. Check out these spoilers for next week’s GH episodes.

We’ll see TJ Ashford (Tequan Richmond) back in Port Charles to heat things up with Molly Lansing (Haley Pullos) but he’s clueless that his mom Jordan Ashford (Vinessa Antoine) is keeping secrets from him with his Uncle Curtis (Donnell Turner). Is it about Shawn Butler (Sean Blakemore) being his bio-dad?

New character Professor Parker will be seen this week. He’s the guy Kristina Corinthos (Lexi Ainsworth) told Sam Morgan (Kelly Monaco) about, but it looks like Kristina left out a bunch of details. Did she sleep with her professor? Is he in town to blackmail her? Kristina’s storyline picks up and it’s a hot mess.

Carly Corinthos (Laura Wright) and Sonny Corinthos (Maurice Benard) continue to fret about Morgan Corinthos (Bryan Craig) but he’s doing better than they think. Not only does Morgan turn down a chance to party from Darby Colette (Jesica Ahlberg) but he’s working to make things right.

Morgan has a sit down with Kiki Jerome (Hayley Erin) and says he still has feelings for her and wants to make a go of things. Kiki is uncertain but will agree to one date with Morgan to see how it goes. Meanwhile, Paul Hornsby (Richard Burgi) also has Kiki concerns.

Paul thinks Kiki knows too much about his relationship with her mom Ava Jerome (Maura West) and since Kiki has ties to the Corinthos clan, he doesn’t like this. Sonny is on to Ava and finds out more about what she’s been doing with gunrunner Raj. Sonny is ready to strike soon.

Alexis Davis (Nancy Lee Grahn) will file a lawsuit on Olivia Falconeri’s (Lisa LoCicero) behalf against Mayor Lomax (Shari Belafonte) for violating her right to nurse in public. Nina Clay (Michelle Stafford) jumps on the bandwagon – looks like this might be the cover story for the next issue of Crimson.

Julian Jerome (William deVry) has strong words for his sister Ava but then tries to make peace with Sonny to make his fiancée Alexis happy. Will Sonny take him up on the offer of a détente or will Sonny be unwilling to forgive him over Duke Lavery’s (Ian Buchanan) murder?

Anna Devane (Finola Hughes) and Robert Scorpio (Tristan Rogers) close in on Carlos Rivera (Jeffrey Vincent Parise) and Sabrina Santiago (Teresa Castillo). Sabrina has a crisis and Carlos is there for her in a big way. Anna and Robert will find themselves in danger after they uncover shocking information.

Franco (Roger Howarth) warns Liz Webber (Rebecca Herbst) about how dangerous her kid is – he tells her that Jake Spencer (James Nigbor) is scary – like “Franco level scary.” Liz is stunned. Jason Morgan’s (Billy Miller) recovered memories lead him closer to Sam which pushes little Jake closer to the edge.

Now that she’s winning back her man, Sam tries to bury the hatchet with Liz but that goes badly – likely because of Jake – and Sam may be in mortal peril soon. Lulu Spencer (Emme Rylan) also wants to make peace – with her estranged hubby Dante Falconeri (Dominic Zamprogna) but he’s not interested.

Valerie Spencer (Brytni Sarpi) is still furious about what Lulu did to her with Johnny Zacchara (Brandon Barash). Johnny is sent off to the big house, but not before Lulu stops by to thank him and tell him goodbye. Later, Lulu consults Maxie Jones (Kirsten Storms) and Olivia on how to win back Dante.

Dillon Quartermaine (Robert Palmer Watkins) stands by Lulu in her time of need and Valerie gives Dante an ultimatum about Lulu and her shenanigans that almost got Val killed.

Is Valerie done with Dante or will they be entangled once again now that he’s turning on Lulu over the Johnny incident?

Tracy Quartermaine (Jane Elliot) is thrilled to hear Hayden Barnes (Rebecca Budig) accepted Nikolas Cassadine’s (Tyler Christopher) proposal. But then Tracy is shocked by a familiar face on vacation – could it be Luke Spencer (Anthony Geary) or the not so dead Helena Cassadine (Constance Towers)?

All this and more on the GH episodes for the week of Monday, January 25 through Friday, January 29. Don’t miss a moment of the action and come back to CDL for detailed daily “General Hospital” spoilers and news.