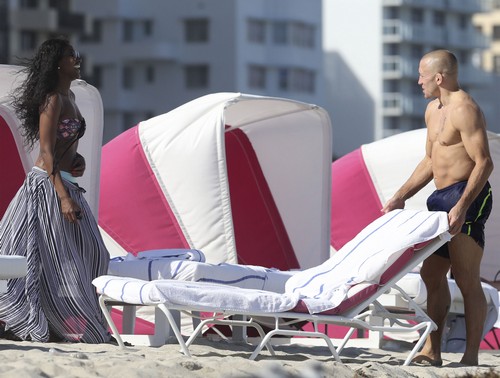 UFC star Georges St-Pierre was spotted enjoying a relaxing beach day with a mystery girlfriend in Miami, Florida this past weekend. According to sources, the UFC fighter and his companion spent some time under the warm South Florida sun for a little sunbathing before frolicking in the water together.

He also apparently had a pair of boxing gloves with him on the beach, although it’s unknown if he used the opportunity to work out near the surf and sand with his new female friends.

Of course, there might be a good reason why Georges St-Pierre is in Miami. According to reports, he’s been ruled out of UCF 206 in Toronto, so is that why he hasn’t made his way home yet?

Dana White even told the ‘Jay and Dan’ show, “GSP’s not fighting in Toronto. I don’t think he does (fight again). There’s a certain mentality you have to have to be a fighter, and Georges St-Pierre hasn’t had that mentality for a long time. And sometimes that’s not a bad thing. Listen, the guy went out on top. How many athletes really go out on top? Go out the way you want to go out? The guy made a lot of money and when you take – this isn’t a sport you take a three-year layoff from.”

Of course, GSP and Dana’s war of words have gone on for months now in the media. GSP might not be in for 206, but there’s still 207 and that’s why he’s in preparation mode, despite Dana saying Georges St-Pierre is not mentally or physically ready to fight again, especially after taking a three-year hiatus.

Back in 2013 he dealt with several blows that had nothing to do from with getting hit inside the octagon, including his father’s health issues and his baby mama drama, all of which he denied at the time.

Yet, there’s no doubt that Georges St-Pierre wants to fight again. After a three-year hiatus he’s looking the best he’s been in years. Take a look at our photo gallery below of Georges St-Pierre with his new mystery female companion and let us know what you think.

Does Georges look fighting fit to you? Is he ready for a comeback? Drop us a line with your thoughts in our comments section and of course, don’t forget to check back with CDL for all the latest news and updates on all of your favorite celebrities right here.

Georges St-Pierre enjoys a relaxing beach day with a mystery woman in Miami, Florida on October 15, 2016. The UFC fighter and his companion did some sunbathing, then frolicked in the water. St-Pierre also had a pair of boxing gloves among his gear. FameFlynet