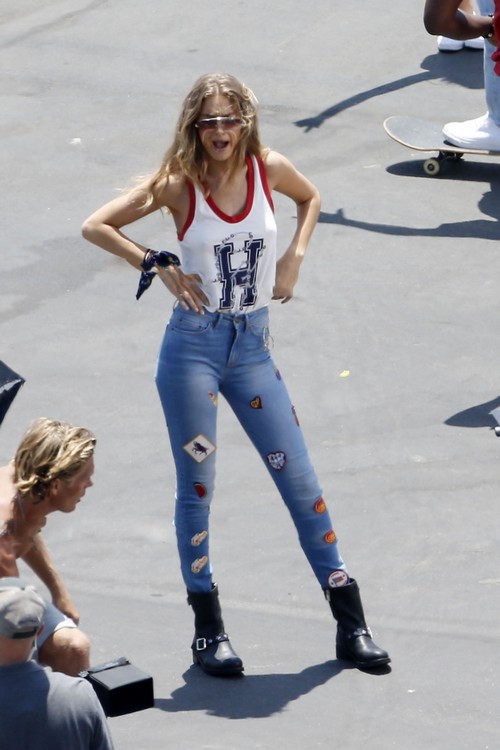 Gigi Hadid and Bella Hadid did not have starring roles in the Real Housewives of Beverly Hills but thanks to their mother Yolanda Hadid being in the spotlight, it helped put the sisters in the spotlight as the former Dutch model herself has apparently been curating their careers herself while also giving them the exposure they need on her multiple social media channels.

According to Page Six, Yolanda Hadid along with her ex-husband Mohammed Hadid have long been molding their daughters into the “social media supermodels” they are today thanks to their shameless and tireless promotion.

Even though both Gigi Hadid and Bella Hadid do not have the supermodel height or measurements according to industry standards, they cover almost every fashion magazine and walk the most important runways in New York, Paris and Milan.

This is mostly because their mother Yolanda Hadid has given them no choice. The publication write, “Under Foster’s tutelage, they used their family wealth and savvy to build mammoth social-media followings and parlayed it into modeling careers that turned a mere illusion of fame into the real thing.”

What’s more, Mohammed Hadid allegedly paid for Bella Hadid’s plastic surgery, which includes a nose job and an upper-lip implant while Gigi Hadid’s figure has been heavily criticized by industry heavyweights. Insiders say that Gigi Hadid’s weight is a problem for designers, yet she’s only signed on to most campaigns because of her mother’s reality television popularity.

New York Model Management’s director Cory Bautista even implies that Bella Hadid is no model as she’s simply ‘piggybacking’ on Gigi Hadid’s fame. He says, “If Bella didn’t know how to model, I’m sure they were given some allowances because Gigi had already paved the way for her sister to come in and go on the same path.”

If that weren’t enough, many super models of the past have even hinted that Gigi Hadid and Bella Hadid are ‘no super models’ and if it weren’t for their Instagram, Twitter and Snapchat accounts or Yolanda Hadid’s reality television popularity, they would just be another pair of spoiled rich kids from Beverly Hills.

Tell us CDL readers, do you agree? Do you think Gigi Hadid and Bella Hadid are only successful because of their mother Yolanda Hadid? Let us know what you think.

Gigi Hadid is seen shooting a music video in Santa Monica, California on July 28, 2016. Gigi could be seen dancing around and getting out of a BMW that had the license plate ‘Gigi’. FameFlynet