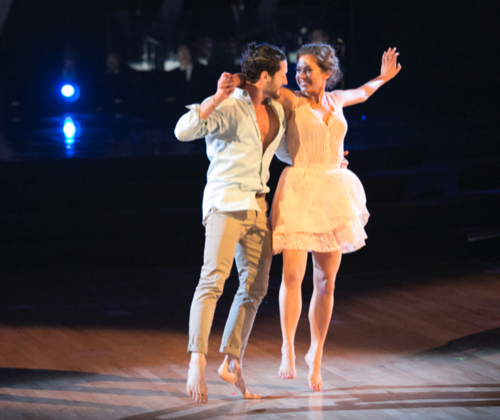 Tonight on ABC the 10 celebrities returned to the “Dancing With The Stars” Ballroom for “Disney Night.” Ginger Zee & her professional dancer Valentin Chmerkovskiy hit the dance floor and danced a Foxtrot routine to “Belle” from Disney’s “Beauty and the Beast”.  Did you watch tonight’s episode? If you missed it we have a full and detailed recap, right here for you.  Did you miss any of tonight’s performance videos? If you did we have them all, right here for you!

Judges comments on Ginger’s DWTS Week 4 Foxtrot: Carrie Ann: “That was ridiculously good, once you got in hold, it was the best from any partnership this season.” Len: “What a tasty dish, a hit of Tango on a bed of Fox Trot. The best dance this season so far.”Zendaya: “It was like watching a Broadway musical, you didn’t get lost, you were the star of the show.” Bruno: “It had that grand theatrical look, everything was crystal clear. I loved it”

Watch the video below and let us know what you think, do you agree with the judge’s comments? Do you think Ginger did enough to avoid elimination tomorrow? Sound out in the comments and let us know your thoughts?