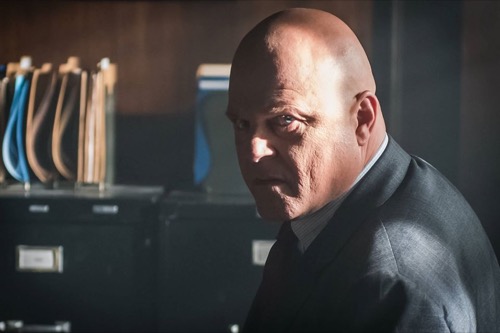 Tonight on FOX their hit drama series Gotham airs with an all-new Monday, September 26, 2016, episode and we have your Gotham recap below.  On tonight’s Gotham episode, Bruce’s (David Mazouz) investigation of the Court of Owls is endangered and Ivy Pepper (Maggie Geha) returns to Gotham.

Did you watch last week’s Gotham premiere episode where Bruce was taken but a Doppelganger Turned Up?  If you missed the episode we have a full and detailed Gotham recap of last week, right here!

On tonight’s Gotham season 3 episode 2 as per the FOX synopsis, “Fish Mooney (guest star Jada Pinkett Smith) takes matters into her own hands to locate Hugo Strange (guest star BD Wong), forcing Gordon  (Ben McKenzie) to reluctantly team up with journalist Valerie Vale (guest star Jamie Chung) to find her. Penguin (Robin Lord Taylor) rises in popularity after criticizing the work of the GCPD and Bruce’s (David Mazouz) investigation of the Court of Owls is compromised.

Valerie Vale went to Jim for help with her latest story. Valerie had wanted to catch and then write about Fish Mooney’s capture; however, she lost touch with her source and Jim was good at locating people and he also had a better chance of capturing Mooney than she had doing it alone. So she tempted Jim with the bounty out on Mooney. Valerie reminded him that the Penguin had put out a million-dollar bounty on Mooney and, apparently, Valerie didn’t want to claim any cent of it. She just wanted the story. But her contact that she wanted Jim to find was, surprisingly, Selina Kyle and so Jim knew that the only way he could find Selina was to ask his crazy ex.

Barbra should technically still be at Arkham, but Hugo Strange managed to sign a paper that said she was sane. She’s now free to cause as much trouble she wants. Yet, because it was Barbra, her focus was still on manipulating, if not outright hurting, Jim. Jim is her ex-fiancée. Barbra implied that she did know where Selina was and that she wanted only one thing in return for the information. She wanted Jim to kiss her. One simple kiss and he would have everything he needed to find Selina. And, well, Jim wasn’t a man to be pressured into doing anything much less kissing so decided to take a stand – on principle.

Jim told Barbra “no,” which risked losing his best source. Valerie blamed Jim for being stubborn and not going through with a mere kiss. She abandoned him on that part of town while she drove to the latest “911” – the two didn’t cross paths until she tried going back to him for help. Valerie had gone to Jim’s old desk at the police station because she knew that he would have to rely on his police buddy to help find information. She knew eventually that their paths would cross there. However, Jim wasn’t in a receptive mood.

Jim was still angry at her, so he ignored her attempts to grab his attention. He had showed up at the police station because he did want to contact some of his old friends and sources there. So Jim had gotten lucky when he ran into Lucius Fox.

Lucius apparently had great information, which would surely lead to Mooney’s capture. However, there were a few conditions that came with it. Lucius had confirmed for Jim that Mooney was sick and that she had killed Peabody because Peabody hadn’t been able to help, so he told Jim that Mooney would need a new doctor. One that was preferably better than her last and one who would surely heal her. And so only one name came up.

They were both thinking Hugo Strange, though finding Strange would prove difficult. Strange had been moved to a secure location and the one person that knew where he was, even if he claimed not to know, was Captain Barnes. Barnes had told both men that Jim shouldn’t even be there and that he had no idea where Strange was. But when the Captain was alerted to the fact that Mooney had found Strange, he revealed the location and went there with the full force of his department. He also brought Jim along.

Jim wanted to find Mooney so he did get his chance when the Captain decided to be generous by inviting him along. Yet, that’s where the Captain’s giving nature ended. The captain had wanted him and his men to storm the building, but Mooney had called him from Harvey’s phone and she had issued a threat that she knew would resonate with him. Mooney said that if she saw one officer enter the building she would kill Harvey. So the Captain had taken her threat seriously and he had ordered his men back from the building.

Jim had naturally been upset by that and he had tried to talk the captain out of the decision, yet the Captain threatened to arrest him if he tried to get into the building because he said Jim was merely a civilian now and didn’t matter. Though Jim wasn’t the real problem. The real problem was the Penguin. Cobblepot had roused an angry mob and he had told them that Gotham PD going to let Mooney get away with her crimes if the good people of Gotham didn’t stop them. So while the Captain thought Jim was dangerous, the real danger came from a bunch of civilians marching down on the scene with weapons.

Jim was able to use the mob as a distraction. He waited until the Captain was busy with the mob to sneak into the building from the back in hopes that he would be able to sneak Harvey out of there without anyone noticing. However, he had gotten caught before he could carry out this grand plan. Mooney had had her people watching the doors. One of them was able to sneak up on Jim from behind and take Jim to Mooney. Mooney could have easily have killed Jim, though Jim managed to come to an agreement with her.

Jim told her that all he wanted was Harvey, so he said he was perfectly fine with her helping her get Strange out of the building if she left him and Harvey alone. So everyone was pretty much fine with that plan; however, Strange had practically begged Jim for help. Strange had apparently talked to Mooney earlier about her condition and he already told her that he wasn’t able to help her. And so Strange desperately wanted to be rescued because he knew that Mooney was going to kill him, but Jim looked heartless as he said that wasn’t his problem, even if he had come up with a way to help Strange.

Jim had gotten Mooney out of the building by calling the Penguin and telling him to storm the place with the crowd. But he had also told Cobblepot that the crowd was a diversion and that Mooney would be sneaking out the back. So Jim had tried to come up with everything reasonably possible to settle things, yet he was betrayed by the Penguin – of all people. The Penguin had followed most of the plan when he got his riled crowd to storm the building and he had showed up in the back ready to kill Mooney.

Yet, The Penguin couldn’t do it. He had asked Mooney why she hadn’t killed him out on the bridge and she had told him that he was hers. He had been the one to rub her feet and care for her. So she couldn’t kill him and he had been able to kill her, but Valerie had realized what the plan was and she had later told Jim that Mooney was still alive.

Valerie said that if the Penguin had truly killed her, then that he would have dragged her body out in front of the crowd for everyone to see. Jim spent the night with Valerie to help get his mind off of what happened.

Bruce was pretty busy on tonight’s episode. He had contacted the Court of Owls and he had reached a reluctant truce with them. Bruce had agreed to stop looking into his parents’ death and the elusive woman he met had said that they would stop threatening both him and Alfred. Though, just as Bruce and Alfred tried living with that agreement, someone snuck into the house. And he looked just like Bruce.

And, oh, both Ivy and Leslie are back in Gotham.