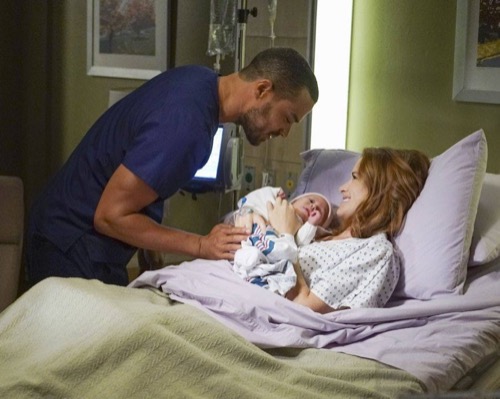 Did you watch the Grey’s Anatomy season 12 finale where there was an important day for Amelia, and Meredith and Maggie provide her with support? If you missed it, we have a full and detailed recap right here for you.

On tonight’s Grey’s Anatomy episode as per the ABC synopsis, “When one of Grey Sloan’s own lands in the hospital, Bailey tries to figure out what happened while the rest of the doctors jump in to help. Meredith juggles huge secrets that affect her relationships with Alex and Maggie. While Richard helps Jo with a big decision, April and Catherine clash over the new baby.”

Owen and Amelia were still dancing at their reception on tonight’s season premiere when two of the hospital doctors had been rushed in needing emergency care. First, there had been April who had had her daughter via an emergency caesarian however Ben had saved her life and that her baby’s. So Ben had actually won back Bailey’s trust because of what he did and had been allowed back on the floor when another doctor came in. And unfortunately, that emergency had been DeLuca.

DeLuca had been helping Jo back to her apartment when they tripped and wounded up on the bed together. However, no one meant anything by it and so they would have laughed it off if Alex hadn’t found them on that bed together. Alex had taken one look at them and had assumed the worse because Jo had been clearly drunk. So he went off on DeLuca and beat the other man to a bloody pulp, but the beating had been so severe that it warranted taking DeLuca to the hospital and so DeLuca had been taken to Grey Sloan Memorial Hospital where Bailey naturally wanted to know what happened.

Bailey tends to grow attached to the interns so she hadn’t wasted any time in calling the police and the police were launching an investigation into what happened. But her husband Ben had his suspicions. Ben had been one of the first people to reach DeLuca and he had seen DeLuca’s reaction to Alex. So Ben had an idea about what happened yet Alex and later had come up with a story to protect Alex. Alex had apparently injured his hand while he was beating up DeLuca so Meredith told him to tell anyone that asks that he had slipped in the rain.

It had still been raining cats and dogs by then so they had both thought the rain excuse would be enough to fool everyone. Yet, Ben’s suspicions had been growing since he saw DeLuca’s reactions and he had nearly said something to Bailey when he had overheard her tell the police that Alex had been the one that found Deluca though for some reason he changed his mind at the last minute and decided to stay quiet. So initially all Meredith and Alex had to worry about was Jo. Jo had still been a little drunk despite everything and so she had begun talking about what happened to Richard. Richard had gone over to her place to see if she alright and he had started asking questions.

Jo had been crying and her clothes had been crumpled so Richard had wanted to know if Deluca hurt her. Though Jo had been very clear when she said he hadn’t and she began telling Richard that nothing happened when she remembered she couldn’t tell him the rest. Jo hadn’t wanted to get Alex in trouble so she had stopped talking when she realised that telling Richard the truth would hurt Alex however, she had wanted to see Alex right away. So she snuck out of the apartment when Richard was making her tea.

Alex though hadn’t been ready to see anyone much less talk about what happened. Alex had been freaking out at the hospital because he was worried that DeLuca wasn’t out of danger and that the other man could still take a turn for the worse later on in the night, but Meredith kept telling him to repeat the story they came up with. So Alex continued pretending like nothing was wrong and he even did so when Ben tried to tell him that he knew. Ben had tried to talk to Alex and get him to talk to the police before this could any worse. However, Alex told Ben that he must be confused.

Alex chose to stay with the lie so he told Ben that he had tried to save DeLuca’s life when he found him like that all banged up and that he had gotten the banged up hand for his trouble. So Alex was still trying to downplay everything as if he had been the hero of the story. But Meredith had later checked on DeLuca’s scans and she had been worried by what she saw. DeLuca had high-blood pressure and he needed surgery so Meredith had been worried by that yet she wasn’t freaking out as bad as Alex or Maggie.

Maggie had still had feelings for DeLuca so she had asked to be the one to notify his parents about what happened and she also wanted to sit on DeLuca’s surgery. Technically it was Riggs that was going to be performing the surgery with Jackson though Maggie had just wanted to hold DeLuca’s hand so that he knew he wasn’t alone. So Maggie had talked things out with Meredith before surgery. She had wanted to tell her sister that she had almost called DeLuca to see if they could get back together when Richard jock-blocked her and she then thought about hooking up Riggs.

Only Maggie thought it was almost funny in a way that now Riggs believed she was still in love with DeLuca that he hadn’t even noticed that she had been flirting with him earlier. So Maggie had found the humor in that however Meredith had realized how she had escaped an awkward conversation with her sister. Meredith and Riggs apparently had a thing going and Riggs was all about getting into her pants. Yet, Meredith wasn’t sure if she should pursue things with him until she had settled everything with Maggie and so Riggs trying to flirt with her before surgery just made her mad.

Meredith hadn’t been interested in flirting while her sister was upset and personally she had also been upset by this thing with DeLuca. Meredith had heard what Alex told her and she hadn’t thought he was wrong when he assumed that either DeLuca was taking advantage of Jo or she had been using him to get back at Alex. But then Stephanie came to talk to her and Stephanie, herself, had heard the truth from a reliable source. Stephanie had gone to Jo and had asked her what happened so Joe had told her everything.

Jo had wanted to tell Alex first, but he had talked over her and had blamed her for what happened when she got as far as telling him that DeLuca hadn’t pushed himself on her. However, Jo had told Stephanie the entire story and Stephanie had told Meredith everything she had gotten from Jo. So Meredith had ended up confronting Alex about jumping to conclusions. Meredith had said that she had been hoping that Stephanie was lying because that’s how bad she wanted to believe he didn’t beat someone almost to death because he made a mistake and that they now both have to tell the truth.

Though Alex had wanted to tell Bailey and the police after he talked to DeLuca. So he had gone to see DeLuca to apologize when he saw that Jo was in there with DeLuca and they both had a negative reaction to seeing him. Jo had just been upset yet DeLuca had nearly had a cardiac arrest simply from seeing Alex in his hospital so Jo had quickly ushered Alex out of the room. And Alex then hadn’t known what to do with himself. He had told Meredith that he would tell the police after what happened after talking to DeLuca and instead he had been a little loss.

Alex had seen the police and he kept pushing what he was supposed to do off. Yet, Meredith hadn’t been kidding when she said that she would tell Bailey if Alex didn’t. Meredith had gone to Bailey and had told her that it was Alex. She said that Alex had been the one to beat up DeLuca and Bailey had almost put the hospital on lockdown until Alex was found though she didn’t have to in the end. Alex did eventually confess to the police that he had assaulted DeLuca and so he had turned himself in before Bailey had been forced to report him. And so Alex had saved his friends from having to turn him in, but Meredih had still caught flak from Maggie.

Maggie had been upset that Meredith knew the truth and hadn’t said anything. So she had made Meredith promised to not keep anything else from her however that very same night Meredith had met up with Riggs. Meredith had apparently wanted to keep from hurting Maggie so she had told Riggs that she didn’t have feelings for him and that had been enough to send him on his merry. But Meredith had still gone out that night to see Alex in holding.

Meredith had wanted to assure Alex in some way that he still had her so she had been trying to tell him that he wouldn’t go to prison. However, she didn’t know that for certain and DeLuca was very clear about pressing charges. So who knows if Alex will go to prison or just lose his medical license yet he felt that Bailey would surely not welcome him back at the hospital. And so he thought his career there was over.