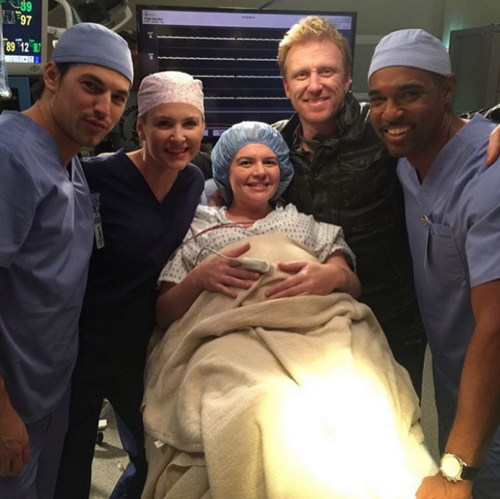 Tonight on ABC Grey’s Anatomy returns with a great all new Thursday March 17, season 12 episode 14 titled “Odd Man Out,” and we have your recap below. On tonight’s episode, Richard (James Pickens, Jr.) swaps pairings among the residents and attendings, baffling everyone.

On the last episode, Several of the doctors visited a military hospital to perform a risky operation on a veteran. Meanwhile, Andrew grew to dislike the secret nature of his and Maggie’s romance; Ben made a hasty surgical decision; and cheerleaders caused chaos in the ER. Did you watch the last episode? If you missed it, we have a full and detailed recap right here for you.

On tonight’s episode as per the ABC synopsis, “Richard swaps pairings among the residents and attendings, baffling everyone. Meanwhile, Arizona makes a bold decision as she treats a woman who’s carrying quadruplets; and April faces a tough choice.”

This episode looks like it is going to be a great episode and you won’t want to miss it, so be sure to tune in for our live coverage of ABC’s “Grey’s Anatomy” Season 12 Episode 14 tonight at 8 PM EST on ABC. Sound out your comments below and let us know how excited you are for this 12th season of Grey’s Anatomy, has it been everything you were hoping for so far?

Richard has apparently noticed that some of the residents as well a few attendees have gotten to be complacent on tonight’s episode of “Grey’s Anatomy”.

And that idea had come to him after he began seeing the attending doctors play favorites. It seems that he had been walking around the hospital one day, just minding his own business, when all of sudden he saw something that he didn’t agree with. He saw cliques everywhere as if the hospital was still high school and he also caught on to the fact that people were no longer being rotated. Which was a problem at a teaching hospital.

Technically, the residents were supposed to be given opportunities in each surgical field as part of their residency and there was a reason for that. Some people go into the residency believing that they are heart surgeons or want to go into plastics. And usually they have a change of heart towards the end because their expansive education allowed them to figure out what was really their passion.

So Richard had seen what he seen, he automatically thought that the hospital was failing their residents and most of them blame for that were on the attending doctors. They were the one that were kept on asking for the same person over and over again. And thus they put up the biggest fight when Richard ultimately put his foot down.

Richard had gone on to pair up different residents with different doctors and therefore everyone had been thrown off whack.

Meredith who had been paired with Jo had somehow taken out all of her frustrations on Jo. As if it was the young woman’s fault that she was not Penny and wasn’t up to date on Meredith’s case files as Penny would have been. So Jo had at least tried to bite her tongue. She didn’t after all wanted to risk upsetting the Chief of General Surgery much less Alex’s friend. Yet, the breaking point came for her when she had tried to approach Meredith about calling her the right name and Meredith then dismissed her.

Apparently Meredith didn’t think it was a problem that she occasionally called Jo by Penny’s name and she also didn’t think that Jo should be offended after she had been spoken to as if she wasn’t herself a doctor. So Meredith had dismissed Jo by saying the other woman was blowing things out of proportion. And that had finally made Jo stand up for herself.

She told the other woman that she was a person and she was in Alex’s life. Plus, she may have mentioned that she was tired of taking Meredith’s crap so Jo did what she have done months ago. She drew a line in the sand for Meredith and everyone else to see.

And somehow still ended up feeling like she was in the wrong when she had told Meredith to get her own boyfriend.

Elsewhere in the hospital, though, Amelia was forced into working with Penny of all people. Which was another problem because Amelia managed to be another irrational doctor that just hated Penny for something that wasn’t her fault. So Riggs who was on the same case as Amelia and Penny was forced to ask Amelia what Penny had done.

He had been with them all day so he had seen that Penny was a lot more capable than Amelia may have wanted to let on. But it hadn’t made sense to him why he would bark at her and barely tolerated her presence. And so he had later taken Penny side when their patient was crashing and needed someone to save him from a blood hemorrhage.

And Penny did step it yet it had cost her. Amelia had come back into the room and had seen that Penny had acted against her wishes. So yelled at her even though Penny had technically saved their patient’s life.

However, Penny didn’t say a word to Amelia about her own treatment. She had talked Jo into standing up and saying something to Meredith, but just couldn’t do the same for herself. Nor did it appear as if she would want to if she had the courage to do so. And that could be because she still blamed herself for Derek’s death as well.

Only their patient had to come first. The patient had a wife and soon to be wife waiting for him and so Amelia couldn’t delay his surgery until Stephanie was ready. And Riggs quite literally had proof on his side when he said that Penny could be just as good in the OR.

So Riggs had talked Amelia into accepting the fact that Penny was her resident for the day and the ladies had gone into surgery hoping for the best. Although, despite everything they tried, the patient had simply been too weak. And he had later died in surgery though Amelia hadn’t blamed Penny for that.

In fact, she had reassured her and had asked Penny to come along as they delivered the news to their patient’s loved ones.

But the one resident that had shined the brightest and experienced the least amount of trouble had been Ben. Ben had been put on Arizona’s detail and he had surprised her by being able to keep a very frightened mother calmed in the OR. So he had impressed Arizona enough that she asked for him again.

And Meredith did finally realize that she had been mistreating Jo which she apologized for. Yet she hadn’t been that way out of jealous. She told Jo that had simply too many women hurt Alex for no good reason and she hadn’t wanted to see that happen again. Bur she was sorry and she told Jo that she should have spoken up sooner.

Though, once the day was done with, Amelia realized that Penny had a skillset that surpassed any other resident and that’s when she knew that she had to do the right thing. Which was to teach Penny. And guide her through neurosurgery even if there was a part of that really didn’t want to.

And on tonight’s episode there was a betrayal!

Arizona told Jackson that April was pregnant without her consent!