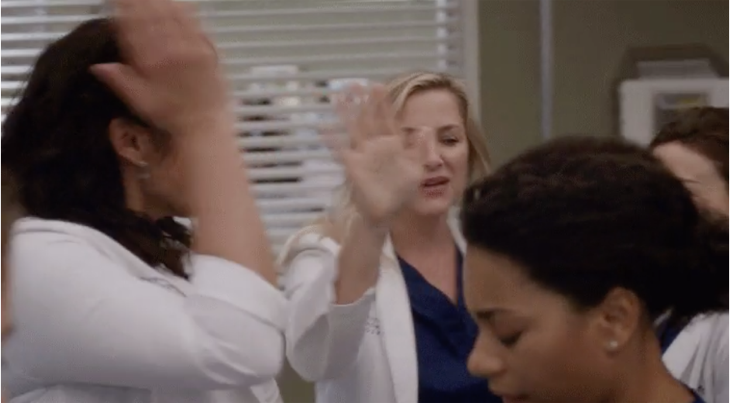 Tonight on ABC Grey’s Anatomy returns with a great all new Thursday March 3, season 12 episode 12 titled “My Next Life.” On tonight’s episode, Meredith’s (Ellen Pompeo) first surgical patient returns to the hospital with a new aneurysm, and Amelia takes on the case.

On the last episode, Jackson and April’s romance was recalled through flashbacks, starting with their first meeting. Meanwhile, the lengthy progress of one of Jackson’s patients was charted. Did you watch the last episode? If you missed it, we have a full and detailed recap right here for you.

On tonight’s episode as per the ABC synopsis, “Meredith’s first surgical patient returns to the hospital with a new aneurysm, and Amelia takes on the case. Elsewhere, Maggie believes Richard knows about her secret romance with Andrew; and Arizona considers jumping back into the dating world.”

This episode looks like it is going to be a great episode and you won’t want to miss it, so be sure to tune in for our live coverage of ABC’s “Grey’s Anatomy” Season 12 Episode 12 at 9 PM EST!

An old face returned to Grey Sloan Memorial hospital though when she had first been admitted as a patient, the then teenage Katie Bryce had known the hospital as Seattle Grace Hospital and the only Dr. Shepherd she knew of had been Derek. A very capable man. So Amelia ended up being quite a surprise for Katie.

Yet, Meredith had ultimately surprised them all with her eagerness to be part of Katie’s case again. Meredith had apparently remembered Katie’s case because she and Cristina had been the only two that had diagnosed the young woman’s mysterious seizures. And Katie had also played a part in Meredith’s career because her aneurysm had been Meredith’s first surgery.

Only Meredith didn’t want to be on Katie’s case because of the significant part it played in her life. She also liked the connection that Katie had to Derek. Derek had after all been the chief of neurosurgery and Katie’s case had in a way brought Derek and Meredith’s closer. However, Amelia was going to let Meredith ride roughshod over her in order for Meredith to feel closer to Derek.

Meredith wasn’t a neurosurgeon and she wasn’t even on Amelia neuroteam. A fact that had both delighted Katie and had given her reason to believe that she was in safer hands than before. Which was when Meredith had been one of the interns to continuously lose her around the hospital. So Katie didn’t exactly have a lot faith in the other woman’s capabilities.

But she was going to have to trust Amelia. Amelia and Stephanie had run a Cat-Scan and unfortunately Katie’s aneurysm had come back. Only this time it was bigger and a lot more dangerous to remove.

So if Meredith had a choice in the matter, she would have liked to be there when Amelia gave it her best shot yet she had her own patient to worry about. An older woman by the name of Daphne was finally in remission from cancer and all she had to do was stay healthy until her chemo port could be removed. Though, sadly for her, she developed a blood issue that needed to be carefully monitored and the heart surgeon on her case happened to be Riggs.

Riggs and Meredith were still on rocky ground, but they had to work together for Daphne sake. And so they came to an understanding of sorts.

Meredith was going to play her part until their patient was deemed critical and that’s when Riggs was going to take over. Yet, before they decided to check to see if Daphne stopped bleeding on her own, both doctors came together to convince their patient to call her son while she had the chance. Daphne and her son had been estranged for years and the doctor wanted her to go into the operating room with no regrets.

So Daphne did call her son and it seemed like he forgave her for their falling out because he told her that he was going to meet her at the hospital. Though that meeting ultimately never took place. Daphne’s condition took a turn for the worse following that earlier conversation and she died in the operating room.

And so Meredith demanded to speak with Riggs afterwards. She wanted to know why the picture that Owen had of him and the man she just saw hadn’t matched. And therefore she asked him about his wife Megan.

Megan and Riggs had been doctors overseas and everything had been fine between them. Until one day, Megan decided to go on a helicopter that was going to be flying over unsafe enemy territory because her patient needed to be moved. And Megan had talked Riggs into letting her go, but Riggs was the one that later had to inform her family when her helicopter disappeared with her on it.

There was no debris and there weren’t any answers. So Owen blamed Riggs for what happened to his sister because he believed it should have been Riggs on that helicopter. Not Megan!

Which wasn’t fair yet that’s how Owen chose to grieve and, now that he’s on better footing with Amelia, he’s finally begun to open up to her about the past. And the two are now starting over as a real couple. That actually have dates.

And though Meredith and Riggs suffered a personal tragedy when they lost their patient, Amelia had proven something to herself with Katie. She hadn’t believed she could live up to the image of Derek that so many people had but she did that by successfully performing surgery on such an aneurysm. And she also carved a name for herself because of it.

So now we wait. We wait for April to finally tell Jackson she’s pregnant before he figures it out for himself and we wait for Richard and Maggie to figure out their father-daughter relationship because it just isn’t good for him to want to be her friend one second but then threaten DeLuca the next.