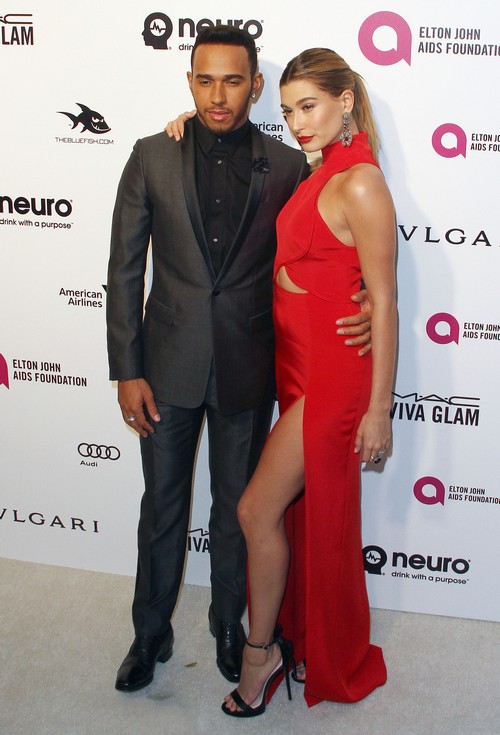 Was Hailey Baldwin cheating on Justin Bieber when she cozied up to Lewis Hamilton at Elton John’s Oscar viewing party – is Justin Bieber jealous? In a stunning red gown that showed off her endless legs, Hailey Baldwin was very hands-on with her date, Lewis Hamilton. They were seen in attendance at Elton John’s Oscar viewing party on Sunday, February 28.

As they walked along the red carpet, there was little hesitation between the pair in wrapping their arms around each other. Is this also another platonic relationship for Baldwin and her cozying up with Hamilton simply for show?

Or is something serious brewing as this was not the first occasion that Hailey and Hamilton were spotted together. At the Monaco 2016 staging of the Formula One Grand Prix Hailey was present to support the British speedster.

One can hardly help but wonder if things are going to heat up much further since the 31 year old British Formula One racer Hamilton is quiet the eligible bachelor. Has 19 year old fashion model Hailey Baldwin finally set her eyes on a man she would like to keep?

Fans of heartthrob Justin Bieber have been speculating for months as to the exact nature of the relationship between himself and Hailey Baldwin. A February 11 article on Yahoo! Celebrity was blatant in its questions of the pairs relationship – were they dating, simply friends or engaged in a business arrangement?

With Hailey and Hamilton seen all cozied up for Elton John’s party is Bieber finally experiencing the green twinge of jealousy?

Excerpts from the March 2016 issue of GQ Magazine quoted Bieber as saying Hailey was “…someone I love” and that they do spend a lot of time together. The pair mutual appreciation for each other has been obvious even if they refuse to admit to the exact nature of their relationship.

At the February 2016 hosting of the amfAR New York Gala, Hailey Baldwin spoke about Bieber and herself to E! News that they were not an exclusive couple. “Relationships at this age are already complicated,” she continued “but I don’t really like to talk about it because it’s between me and him”.

Hailey Baldwin appears to be enjoying the interest following her relationship with these handsome hunks. She and Justin had exhibited lots of PDA when they rang in the New Year in St. Barth’s, yet – here she was again piquing the curiosity of her admirers with another night out with Lewis Hamilton.

Will Justin Bieber continue to be blasé when he realizes that Hailey Baldwin and Lewis Hamilton have become so close?