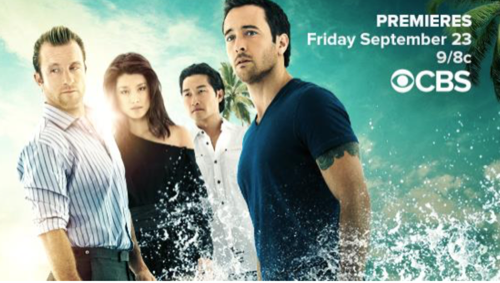 Tonight on CBS Hawaii Five-0 air with an all-new Friday, September 23, 2016, episode and we have your Hawaii Five-0 recap below.  On tonight’s Hawaii Five-0 premiere, the body of a serial killer being found in Five-0 headquarters with an ivory chess piece in his mouth.

Did you watch last season’s Hawaii Five-0 finale where Five-0 got trapped inside a dilapidated building in Oahu’s Chinatown?  If you missed it we have a full and detailed Hawaii Five-0 recap, right here.

On tonight’s Hawaii Five-0 premiere, “When the bodies of two serial killers are found on Five-0 property with chess pieces in their mouths, McGarrett and the team hunt for a vigilante as fear grows that tourists aren’t safe in Hawaii, on the seventh season premiere.”

McGarrett was still recovering from his accident on last season if “Hawaii Five-0” and lately that has made him think about where he was in his life. He had wondered about meeting the right one and whether he already met the right one and simply lost her because of obligations or the job. But some helpful advice one night had made him realize that the right woman was still out there and that he had to be patient. So that had made McGarrett ease up on many of the thoughts he’s had while he was at the hospital and he chose to focus that energy back on work.

McGarrett had had a slow recovery at the hospital, but eventually the doctors did give him the all-clear so he had been quick to return to work. However, there had been a surprise for him and the rest of the team when they made it back to headquarters. The guys had unfortunately found a body in the building and, strangely, the body had been a message for them. So they tried to figure out why someone would sneak into Hawaii PD just to drop off the body and they also wanted to understand what the message on the body itself meant.

The victim had a piece of paper stuck to his chest and the paper said “I’ve been a bad boy.” Who was the killer talking about? The victim had been revealed to be some young guy named Anthony Hein and the only trouble that Anthony got into had led to community service as well as a probationary period. So it was hard to imagine that such a light sentence could be for something heinous though the note hadn’t been the only thing that the killer had dropped off with the body. There was also an object of some sort that had been stuffed in Anthony’s mouth.

Only no one knew what the object was and even the new Medical Examiner was stumped. So the team followed up on good old Anthony to see what he might have been into and it turns out there was a trail for them to follow. Though, sadly, that trial ended with the discovery of four bodies. Anthony, who had seemed like a victim, had actually been a serial killer. Someone clearly found out about that because they had made sure Anthony was punished for what he did. And so that more than anything else had left them confused about their killer.

The killer was technically a vigilante because of what happened to Anthony and, at the same time, whoever the killer was could have just as easily have call in anonymously. So Five-0 were still confused by their living killer MO when McGarrett came up with a theory. McGarrett had said that their killer must have had intimate knowledge of what Anthony doing and so he thought the killer might have been Anthony’s accomplice. But the others had doubted his theory until Eric found evidence that Anthony was recording his kills and sending them to some using encrypted emails.

The investigation though took a turn for the worse when one of their own found another body that was practically gift-wrapped for Five-0. Lou had actually been trying to get the story about a killer killing killer suppressed until his unit had more information. Yet, the killer had used that opportunity while he was busy to plant the second body in his car. The second victim was David Larsen and David was also revealed to be a serial killer. David apparently had over ten bodies down in his basement and, like Anthony, David had documented his crimes for someone. Like maybe a partner or a friend.

Governor Keiko Mahoe, however, had been beyond mortified when a new serial killer was found. She had said that there was a vigilante out there that was doing a better job than her own police so shed asked Five-0 to get their act together. The Governor couldn’t afford to quarantine the island until this killer as well as possibly many other killers was found so she asked McGarrett to do for her what he did for the Governor before her. Though, McGarrett had tried to defend himself and his unit.

McGarrett honestly believed that the killer was targeting people that had shared with him. So McGarrett argued that’s how their killer knew about the other serials out there and not because the killer was better than them at their job. However, Five-0 later did the one thing that the governor had explicitly asked them not to do. They ended up causing a panic and at one of the Island’s best hotels no less. And so there was no containing the media, the media was all over the serial killer that targeted other serial killers.

But what led Five-0 to their suspect had been a chess piece. There had been a fragment of an ivory chess piece in Anthony’s mouther and the killer had repeated that MO with David. So Five-0 had looked through paroles who were known for violent crimes and who may have also been a chess enthusiast however their suspect had had a woman tied up in his apartment. And the ensuing high speed chase throughout the city had ended with Pierre’s death.

Pierre, though, was believed to be the killer they were searching for. So everyone had called it a day afterwards and McGarrett had personally chosen to go home. Yet, home was no longer safe. Someone had broken in and had left him a chess piece. And so McGarrett now knows that the serial killer hunting other serial killers out there was still alive.

And remember Sara Diaz? Well, Sara’s aunt and uncle in Mexico had been found and they were looking to get custody of her. Which was hard for Kelly because he had truly come to care for the little girl and had thought of her as family. So who know what will. Maybe Kelly will find out that Sara’s relatives are horrible people and fight to get custody of her and maybe this serial killer they were all chasing was closer than though.

Blurb: Five-0 was drawn into a frightening game of cat and mouse with a serial killer on tonight’s episode of “Hawaii Five-0”.