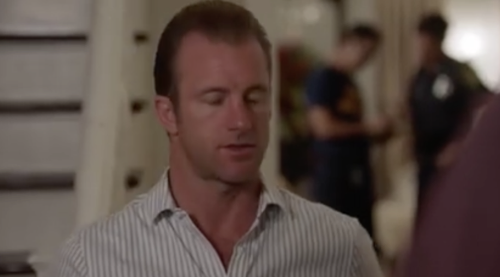 Tonight on CBS Hawaii Five-0 air with an all-new Friday, October 28, 2016, episode and we have your Hawaii Five-0 recap below.  On tonight’s Hawaii Five-0 Kono (Grace Park) and Adam (Ian Anthony Dale) are kidnapped by what appears to be a death cult.

Did you watch last episode of Hawaii Five-0 where when a cache of guns was stolen from a gun range, Five-0 discovered the culprit was intent on making a dramatic and potentially deadly statement on gun violence? If you missed it we have a full and detailed Hawaii Five-0 recap, right here.

On tonight’s Hawaii Five-0 season 7 episode 6, “On Halloween, Five-0 investigates the murder of a medium with a checkered past who was apparently scared to death by a poltergeist. Also, Kono and Adam are kidnapped by what appears to be a death cult.”

Max was back from his sabbatical on tonight’s episode of “Hawaii Five-0” and it seems he had a surprise everyone. He had apparently married Sabrina and the two had clearly gotten hitched recently however no one knew about it because the couple hadn’t told anyone beforehand and Max might have liked showing off his new ring for everyone. So of course, the others had all congratulated Max and they had truly felt happy for him. But it was Halloween and they were working another case that involved a homicide.

So the moment where everyone were happily telling Max congratulations eventually turned into something else. Like curiosity about the latest case. The Big Island as it turns out had one of those stories where a house was haunted and people had nearly gotten killed, but a Hollywood Medium had rented that house and she had died there. Yet, there had been something off about Marjorie Webb’s preliminary autopsy. Max had taken a good look at her at the way she died and his first assessment about what killed Marjorie had been that she died from a massive cardiac arrest. And he thought that there was a chance that Marjorie’s heart failed because stress or terror.

Max had said that her pupils were dilated as if she had been terrified and there hadn’t been marks on Marjorie. Though right before she died, Marjorie had called 911 to report an emergency because she said that there had been someone inside her house yet the alarm had still been set when the police busted down her door and the security cameras that Marjorie put up around the house showed that her intruder was able to appear and disappear at will. So the house was shaping out to be haunted and the only one that was still skeptic about it was Danny. Danny hadn’t believed that the house was hunted in the 1940s and still didn’t want to believe that it was haunted.

However, everyone else had thought that the house was haunted and that went especially for Eric. Eric had been one of the people that was brought to the house to search the place and he had thought that his uncle would try to mess with him though that theory didn’t really pan out when he later began seeing blood coming out of the pipes and he had also saw that someone had written “confess” on Marjorie’s mirror. So the house was pretty scary and someone could even say that it was beginning to play on some people’s genuine fears. Only there was a chance that the “confess” message had been for Marjoie and that it had been done to specifically scare her.

Marjorie had been a well-known medium at one point in time however the business fell on some rough time when she predicted that a little boy that had been kidnapped was still alive and it had later been showed that he had been killed within forty-eight hours of being taken. So Marjorie lost a lot of credibility after that and she had initially thought that someone was out to get her because of what happened to that family she hurt. But Marjorie had hired someone that was familiar with breaking into places and he had dug the grave of that poor boy only to find no body and another message for Marjorie.

So either there was something paranormal happening or someone had gone to exceptional depths to hurt Marjorie at any costs, but Five-0 had found out that someone was bugging Marjorie’s phone and so they brought the great Tirblaine in to answer a few questions. Triblaine was a magician and for some reason he seemed to hate Marjorie more than anyone else. Including the family that Marjorie had hurt. Yet, Tribulaine had an answer for why he hated Marjorie. He said that she was a scam artist that fed people hope when really all she was doing was setting them up for disappointment and so Tribulaine had said that the family of the young boy that died wasn’t Marjorie’s only victims.

Tribulaine had apparently been keeping tabs and so he knew all of the people that had a motive to kill Marjorie. Though he had also been clear when he said that he hadn’t touched one finger on her and DNA analysis had later proved that. DNA showed that a man named Ian Miller had been the one that was “haunting” Marjorie and the police would have killed to have talked to him yet he had been eventually found dead and no one believed that it was a coincidence. So the police had thought that Ian had a partner that killed him to hide what they had done to Marjorie and it turns out that the partner had been Marjorie’s assistant all along.

The assistant who had said her name was Nikki was proved to be Julie Hilman. Julie had run away from home and her parents had gotten worried about her. So Julie’s people had contacted a medium because they had thought Marjorie would help and Marjorie had told them that Julie was dead. However, Julie’s father couldn’t live that and so he had later killed himself because he had thought that he was never going to see his daughter again and had blamed himself though it wasn’t his fault. Nor was it rally Marjoie’s. Marjorie might have been a fraud only she didn’t make Julie’s father kill himself – the only one that had been to blame in his death and Marjorie’s had been Julie’s.

Only Julie didn’t want to own up to what she had done however she’ll now get the chance to in prison and Five-0 made sure of that. But Five-0’s job wasn’t done because Kono had later called them in a panic because she and Adam were being hunted by a death cult through the forest. So Five-0 and HPD eventually came to the rescue and had helped another woman that was seemingly being hunted for no reason. And, once the police began searching the area, they had found several graves that showed the death cult had been killing people for years without being detected.